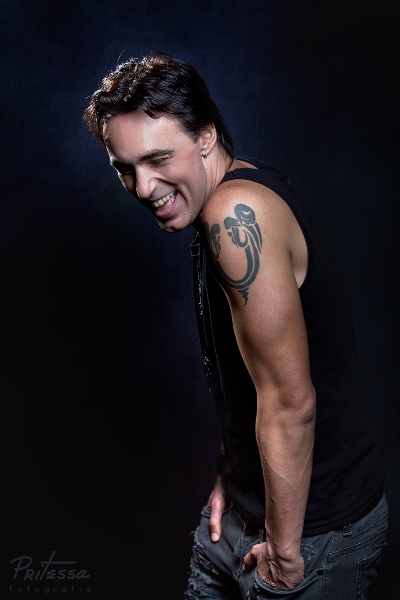 Alírio, firstly congratulations on being the new singer of the Queen Extravaganza. It's with real pride to have a Brazilian musician in Queen's official tribute band.

When and how did you start your musical initiation, your taste and interest in music, please talk a little about your professional career?

I started my career at age 15 singing in rock bands in the Florianopolis City, but the interest in music happened when I was 8 years old and saw Queen show in the first Rock in Rio on TV. Seeing Freddie making 400 thousand people chanting Love of My Life was a watershed in my life. At that moment I understood what I wanted to do with my life, it was Mercury who awakened in me that spark that made me get here. I owe it to him, my great master.

We know that you were a teacher of singing and musical theatre, what is it like to see a student acting in a musical or doing solo work?

I have been a singing teacher for about 17 years, I studied a lot of vocal technique my entire life and I prepared a lot for this career. I did and still do singing lessons today, I started to study scholar and I used this knowledge to help my students, I studied music too, I play the piano, and I also compose a lot. I have many students making a career in both theatre and music in general, and it is always very gratifying to see some of them conquering their own space.

Do you have time to dedicate to yourself to work as a composer?

Composing was one of the things that Queen awakened in me. I wanted to deliver my art through my own music, give voice to what I am and become, and that makes you conquer your space and be remembered for who you are. I have 5 CDs recorded with the bands Khallice, Lince, and Age of Artemis, all released worldwide, with these bands I had the chance to share the stage with Guns N Roses, Iron Maiden, and several mainstream artists. I went to festivals like Rock in Rio for example. Last year I released a solo CD called João de Deus, and I also have some participation in some Angra CDs and other bands. I am currently an artist on Som Livre through Art Entertainment. I must have some 70 songs recorded.

You were in two great musicals, what's the difference between them?

These professional musicals act as franchises and I've been in three of them. I played the role of Jesus in the Mexican version of Jesus Christ Superstar, I did Judas in the Brazilian version of the same musical, a role for which I won awards and very good recognition across the media and the general public.

And the last and coolest of all was the role of Galileo in the Brazilian version of We Will Rock You. Queen has always been in the most remarkable moments of my life. All the tests I've gone through the songs of Queen that never deserted me. In We Will Rock You, Queen gave me something even more incredible...meeting my wife Livia Dabarian who played Scaramouche.

The difference between these musicals is that as an actor you learn to lend yourself to the character, each one is like a son and having contact with the theatre made me a much more complete artist.

What was your first contact with Queen's music and what does it mean to you?

It was in the first Rock in Rio watching the Queen show on TV.

I was so crazy that I stole the Queen records from my mother's record collection! Queen is not only my favourite band but it's also sacred to me. Freddie is incomparable and the strength of his songs echoes in my heart with a truth so great that I always get excited. These songs made me the artist I am today, I have a lot to thank Queen for.

What is your favourite Queen album or song and why?

I like all phases of the band so my favourite music changes from time to time, but Who Wants To Live Forever is special because it was the romantic duet between Galileo and Scaramouche, I remember one day that Brian May sent an email for us explaining the meaning of the song, we cried the rest of the day, it was very exciting.

Besides Queen, who are your other favourite Rock and Roll bands?

The invitation to integrate into the QuEx came from whom? How was the process conducted? How do you get in the Queen Extravaganza? What does it feel like?

I was very moved and both I and my wife cried when we realized what was about to happen. I know my responsibility is huge and since I'm a very focused guy, I'm already preparing myself physically, vocally and mentally for this tour. I'm going to give my soul to this band and I promise to do my best to get these songs delivered as they and the audience deserve. Queen's legacy deserves all the respect and dedication of an artist who has the privilege of being part of a project of this magnitude.

When will you start the QUEX band rehearsals?

I think we start in August or maybe even a little bit sooner. I do not have all the dates yet, but when you want, I'll be there.

Is there the possibility of the band coming to Brazil since the singer is now a Brazilian?

I believe that yes, I already received several messages, but I think that if it rolls, it will be next year.

You will have a great challenge in replacing Marc Martel in QuEx. What do you think of the Canadian musician? Are you prepared to be compared with him and Freddie Mercury?

Marc is incredible! He has a beautiful voice and deserves all my recognition and respect. Freddie has no comparison. I know there will be people who will like it and others who will not, this I have no control over, so I can only worry about what can be controlled and deliver my body and soul to the band.

I think they wanted someone who could deliver these songs in style and respect the band's legacy. I've been stuck a lot in life and I know that the price of getting here was not cheap, I'm willing to die for these songs if I must!

What do you think of Adam Lambert in Queen? What about Paul Rodgers? For you, who would be the ideal lead singer for Queen?

Anyone who sings anything from by Queen and is not Freddie and is bound to suffer the consequences of his actions!

Adam is a complete and versatile artist, a singer who has complete mastery of the voice so that singing these songs becomes necessary. I think it is most appropriate for the band doing all this and still print their essence in these songs.

Paul Rodgers is one of the guys with more of a rock personality. There's this way of singing a bit of blues and it makes the songs sound like they're his. He is a very intelligent artist for understanding this and not trying to be who he is not.

Many of the versions he sang has made me sing the songs of Queen in a different way, risking more. Still, I see Adam as the guy most suited to the task.

You were recently in London to watch Queen + Adam Lambert. You as a fan, how did you feel watching Brian May and Roger Taylor live with Adam Lambert?

The show was incredible, and they were gentlemen all the time.Their tour is amazing, the show was full of energy, everyone broke everything! It was a perfect night.

What are your 2018 projects beyond the Queen Extravaganza?

I have the recording of my DVD on April 24 at the Porto Seguro theatre in São Paulo with very special performances with Angra, Livia Dabarian and Dream Theater singer James Labrie followed by a tour of Brazil between April and June. In July I will star in the opera rock Frankenstein in Florianopolis with the Camerata orchestra that already accompanied Steve Vai in Rock In Rio. And then the tour with the QEX.

A message to Queen fans?

First of all, I would like to thank you for the interview, all the fans of Queen, as I love the band, and also all those who are cheering for me in this new phase.

I would also like to invite everyone to attend the concerts, whether outside Brazil or here. It would be an honour to have Brazilian fans by my side.

Interview by Alba Cassia, with Ana Paula Tatarunas and Ivy Tavares (Freddie For A Day Brazil)