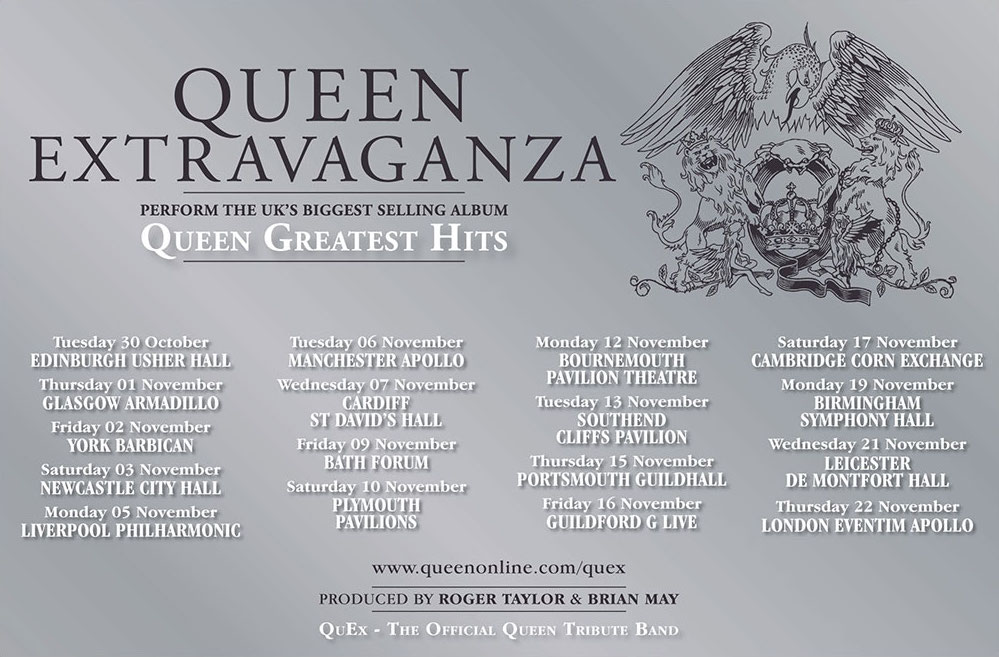 With the country currently in the grips of Queen fever – the band’s current UK tour with singer Adam Lambert is one of the year’s fastest-selling – fans of their music will no doubt be thrilled to learn that there will be another chance to hear Queen’s greatest hits performed live when the Queen Extravaganza, the ‘official’ tribute band created by Roger Taylor and Brian May, returns to the UK for a further series of shows next year.

Pre-sale links for ticket purchase will be made available to the QueenOnline and Queen Fan Club communities from 9am on Wednesday 13th December.

Tickets go on General Sale on Friday 15th December at 9am @ www.seetickets.com

These dates follow the band’s 2015 and 2016 sold out UK tours which celebrated the 40th anniversary of Queen’s iconic album, ‘A Night At The Opera’. The tour culminated with a headlining show at the legendary Hammersmith Apollo in London, a venue once played by Queen themselves in the 1970s.

The Queen Extravaganza – described by Roger Taylor himself as ‘a rock celebration in the Royal tradition’ and designed to enable new fans together with fans of old to celebrate the music of Queen - will play sixteen shows across England and Scotland beginning the end of October 2018 in Edinburgh with the tour winding up in London on November 22.

The 2018 shows will be billed as the ‘Queen’s Greatest Hits Tour’ with the promise to deliver all the hits any Queen fan could want to hear - “Bohemian Rhapsody,” “Another One Bites the Dust,” “Crazy Little Thing Called Love,” “Under Pressure,” “We Will Rock You/We Are the Champions,” “A Kind of Magic,” “Radio Ga Ga,” and “Killer Queen” – just a few to mention - presented 100% live by some of today’s finest musicians hand picked by Roger Taylor and Brian May.

Announcing the dates, Brian May said: “Queen aficionados !!!  This may be your only chance to see ALL of Queen’s Greatest hits performed immaculately – LIVE !!”.

“These guys are incredibly talented, with their scintillatingly perfect recreation of our songs.” says Taylor

Now headed for their sixth visit to the UK, the Queen Extravaganza has already played over 160 dates across the world and made appearances on TV shows such as American Idol where the performance was seen by over 20 million people.