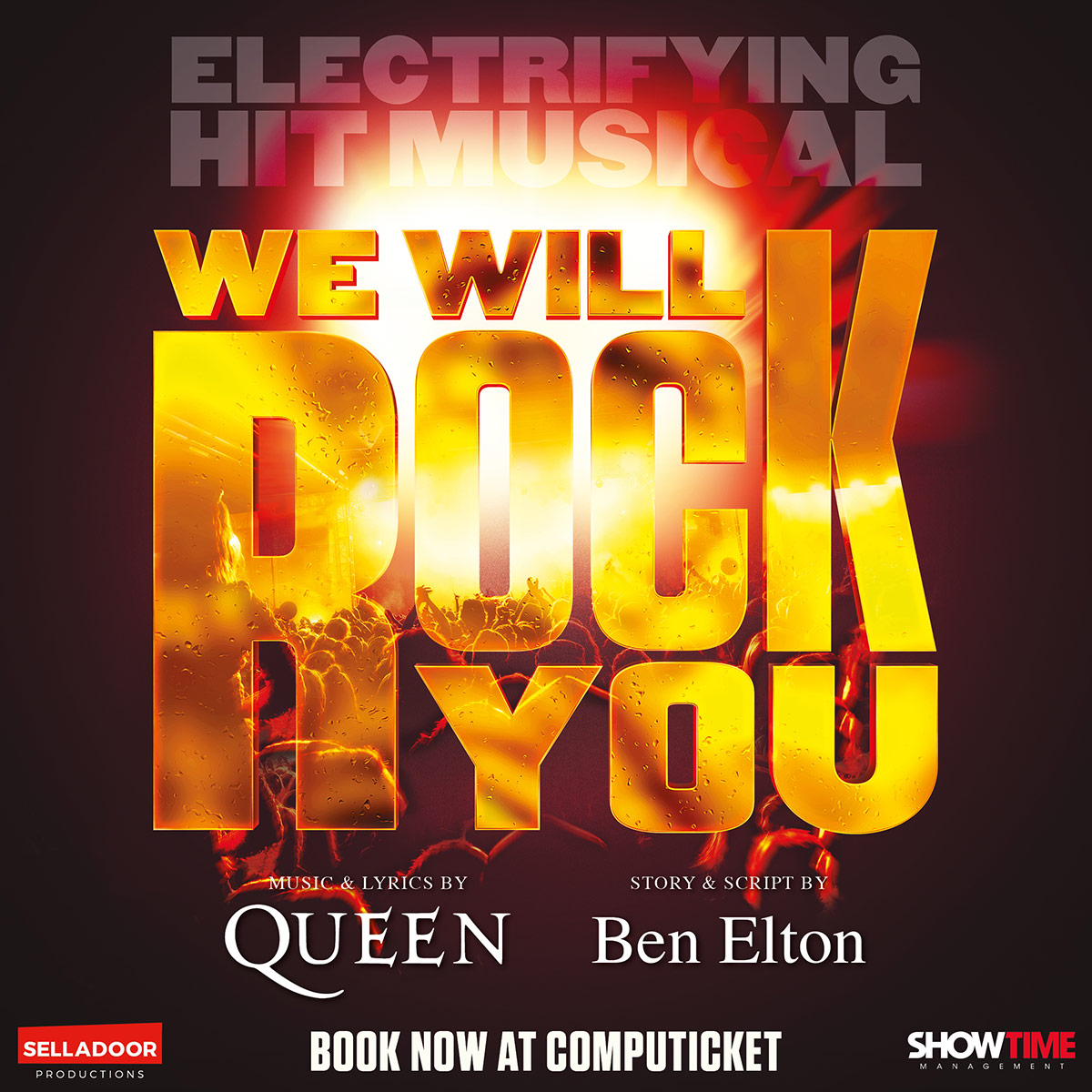 After unavoidable postponements owing to COVID-19 regulations, the brand-new production and major world tour of Queen and Ben Elton’s multi-award-winning rock musical We Will Rock You featuring an all-South African cast, crew and band begins in Manila, The Philippines in October 2022. After touring Asia this hit musical opens in South Africa at Montecasino’s Teatro on Friday, 10 March 2023 and runs until Sunday, 16 April 2023. The four-week Cape Town season at the Artscape Theatre Centre runs from Friday, 05 May to Sunday, 04 June 2023. Thereafter the We Will Rock You World Tour continues in various territories abroad. Tickets for the South African seasons are on sale at Computicket.

Featuring 24 of Queen’s hit songs including Crazy Little Thing Called Love, Killer Queen, and the worldwide favourites We are the Champions, Bohemian Rhapsody and of course, We Will Rock You. “I’m so looking forward to directing a brand new production of We Will Rock You and exploring this dystopian world. I’m especially excited about choreographing to the iconic Queen music and creating a dynamic powerful ensemble who compliment the rock riffs and epic vocals. I’ve assembled a world-class creative team to help deliver my vision and I can’t wait to share this brand-new aesthetic to audiences across the globe. For the fans of Queen, the fans of musicals and the fans of galaxies far, far away, this is for you.” says We Will Rock You Director, Nick Winston.

The musical is produced by SA promoter, Showtime Management in conjunction with Selladoor Worldwide, Carlos Candal, Gavin Kalin Productions and Limelight Productions. Showtime Management previously staged We Will Rock You in Johannesburg, Cape Town and Durban in 2005 and 2006 to rave reviews and standing ovations. Thereafter the show then enjoyed a highly successful tour to New Zealand and Korea in 2007 “We are pleased to re-visit this newly imagined production of We Will Rock You that combines the timeless music of Queen with the creative vision of award-winning British director, Nick Winston, performed by an exceptionally talented local cast to bring this multi-awarding show to the next generation,” says Showtime Management’s Hazel Feldman. “There is no better way to kick-start Showtime’s return to the musical theatre space with a production such as We Will Rock You that appeals across the age spectrum, from teens and young adults to rockers from the 70’s, 80’s and 90’s.”

SHOW INFORMATION WE WILL ROCK YOU 2023

Not valid with any other discount offer

Sunday 14h00 pensioner discount is limited to: Teatro Row U and ZC. Artscape Rows Q and U, subject to availability.

Tickets may only be purchased from a Shoprite Checkers Money Market centre and at the Artscape Box Office.

Only one ticket per valid ID. Not valid with any other discount offer.

Book on line at www.computicket.com or purchase tickets from the Money Market centres at all Shoprite Checkers stores nationwide. Computicket is the official exclusive ticketing agent and tickets should not be purchased from any other supplier/outlets.