The Royal Mail Queen Stamps are now on general sale!

The 13 stamp issue featuring all four band members, a group shot and eight classic album covers has been on pre-sale 23rd June, but as of today are now on general sale across the UK and online retailers, including:

Available to order now in The Queen Online Store or www.royalmail.com/queen

- Royal Mail reveals images of a set of 13 stamps to be issued as a tribute to the musical contribution of rock legends, Queen - one of the most popular and enduring groups of all time

- Roger Taylor said: ‘What an honour. We must be really part of the furniture now!’

- Brian May said: ‘It’s hard to put into words what I feel when looking at these beautiful stamps’

- Renowned for the extravagance of their stage shows, Queen’s live performances are celebrated in a miniature sheet of additional stamps, with images from Wembley Stadium, 1986; Hyde Park, 1976; Hammersmith Odeon, 1975; and Budapest, 1986

- The full set of 13 stamps, available in a Presentation Pack, retails at £16.00. The stamps and a range of collectible products are available now to order from www.royalmail.com/queen & QueenOnline.com 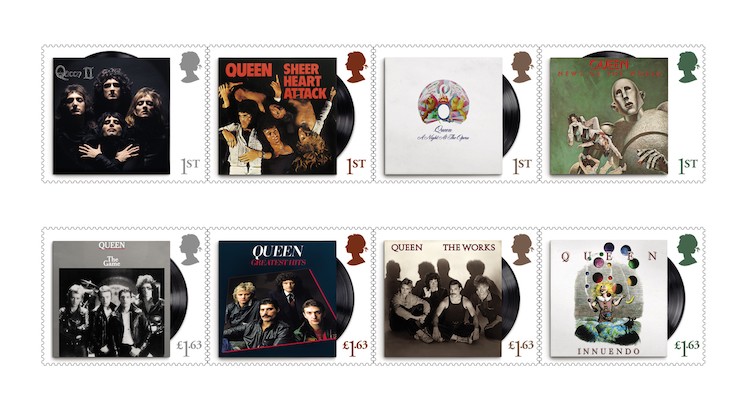 Royal Mail today announced it is issuing a set of 13 Special Stamps to celebrate one of the UK’s most influential rock groups of all time, Queen. With more than 300 million record sales across five decades, they are one of the most successful music artists of all time.

Completing the set is miniature-sheet celebrating Queen’s live performances with images of: Freddie Mercury at Wembley Stadium, 1986; Roger Taylor at Hyde Park, 1976; John Deacon at Hammersmith Odeon, 1975; and Brian May in Budapest, 1986.

The centrepiece of the miniature-sheet is the iconic photograph taken by Johnny Dewe Mathews at the group’s first-ever studio photoshoot in a Primrose Hill studio.

Roger Taylor said of the stamps: “Wow.......stamps featuring our albums! What an honour. We must be really part of the furniture now! Thanks, Royal Mail for stamping on us! In gratitude."

Brian May said: "It’s hard to put into words what I feel when looking at these beautiful stamps.  Since we four precocious boys started out on our quest 50 years ago, our lives have been devoted to making our impossible dream come true.  Sometimes it’s strange to wake up and realise the position in which we are now held – we have become a national institution! And nothing brings this home more than this incredible tribute from Royal Mail. It’s particularly poignant to look at this collection of images now - now that we are all in a world dominated by a coronavirus, in which none of this could have happened.  I just know that I feel an overwhelming desire to own one of these sets!  Somehow it will be a way of persuading myself that it really DID all happen!"

Queen were in their formative stages when they were hired to play their first gig: a charity event at Truro City Hall, in June 1970, while still performing under the name Smile. By the time John Deacon joined the following year, the group had changed their name; the four-piece line-up that would remain together for the next two decades made their first live appearance at Surrey College on 2 July 1971.

From the outset, the theatricality of Queen’s music found a natural outlet in their stage shows. As glam rock flowered alongside Queen’s rise to fame, the group would tap into the extravagance of the era – and then very quickly outstrip it.

The band’s list of musical achievements is rivalled by few: countless platinum, multi-platinum and gold albums; numerous Ivor Novello and BRITS awards; induction into the Grammy Hall of Fame and a recipient of the Grammy Lifetime Achievement Award, Queen also hold the record for the biggest selling album of all time on the Official UK charts with sales of over six million copies of their Greatest Hits album.  With their 2018 feature film “Bohemian Rhapsody” they reinvigorated their core fan base and generated a whole new audience the world over. The film became the biggest music biopic in history and swept the Golden Globes and Oscars with the soundtrack topping the charts the world over.

Few bands can match the breadth of creativity on display in Queen’s discography. Dominating over four decades with their cutting-edge music, the band’s legacy continues to inspire.

Celebrating their 50th anniversary in 2021, Queen becomes only the third music group to have a dedicated stamp issue – following on from the Beatles in 2007 and Pink Floyd in 2016.

Philip Parker, Royal Mail, said: “With their truly original, theatrical sound and effortless ability to mix musical styles, Queen are rock royalty. We pay tribute to one of the most loved bands of all time with these stunning stamps.” The full set of 13 stamps, available in a Presentation Pack, retails at £16.00. The stamps and a wide range of collectible products are available now to order at www.royalmail.com/queen and in the Queen Online Store.

Sheer Heart Attack, 1974, featured the single ‘Killer Queen’ which was their first global hit and they made their first Top of the Pops appearance.

A Night at the Opera, 1975, was their first number one album and featured the ground-breaking song ‘Bohemian Rhapsody’ which, in the era of digital music, has become the most-streamed song from the 20th century.

News of the World, 1977, featured two stadium-filling anthems ‘We Will Rock You’ and ‘We Are the Champions’.

The Game, 1980, included their hit ‘Another One Bites the Dust’ which drew in new audiences.

Greatest Hits, 1981, is the biggest selling album in the UK of all time.

The Works, 1984, featured hit singles including their love letter to the old-fashioned wireless, ‘Radio Ga Ga’.

Innuendo, 1991, was the final Queen album to be released in Mercury’s lifetime, and featured the poignant ‘These Are the Days of Our Lives’.