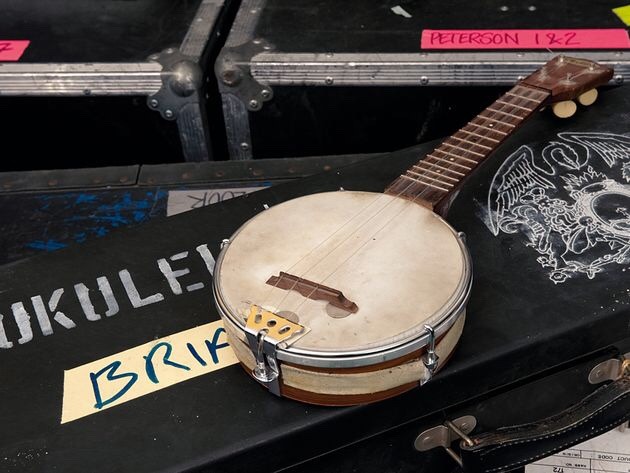 To describe Queen as simply as possible then you would call themselves a classic rock band. But when you look at their catalogue of songs you realise, they are one of the most diverse groups of all time. Some of their most popular albums from the seventies prove this point a lot more than others and there is one style on some of those albums which stands out more than others… music hall. This was a type of British theatrical entertainment that was from the early Victorian era, but its popularity dwindled after the First World War. The style included a mixture of popular songs, comedy, speciality acts and variety entertainment. Though Queen would end up recording half a dozen tracks with music hall influences, all but one was written by Freddie. But despite this, all members of Queen indulged themselves into showcasing their musical talents into producing these songs.

Queen’s first attempt at music hall is seen on 1974’s Sheer Heart Attack with Freddie’s “Bring Back That Leroy Brown”. The song is a throwback to the 1920s music hall style with a backing track consisting of jangle piano played by Freddie, a ukulele played by Brian and even John managing a double bass on the track. Brian also accomplishes a short banjo solo towards the end. In an interview with BBC Radio 1 in December 1977, Brian talked about his contributions to the track; “[“Bring Back That Leroy Brown”] had this kind of Vaudeville atmosphere, and I just thought the ukulele would go nicely on it, and we sort of worked it so that it could be done, and I managed to fiddle a little ukulele solo.” Freddie’s musical creativity and vocal effort with the song is incredibly admirable and is arguably one of the finest vocals on the album. When Queen began their tour for Sheer Heart Attack in October 1974, they added a medley for the first time and a truncated version of the song with limited vocals was added to end each one. The song would remain in the set until the end of the A Day at the Races Tour in June 1977.

Queen’s fourth album A Night at the Opera first released in November 1975, features three songs that are nods to the music hall style. The first track is “Lazing on a Sunday Afternoon” another Freddie composition. This is one of the shortest Queen songs ever released just 1:07 but, fitting in with the theme of the album is still a complicated song. In an unusual experimental manner, the vocals for the song were recorded by the signal from Freddie’s microphone being fed into headphones placed in a metal can creating a megaphone effect. Co-producer Roy Thomas Baker explained in the Classic Albums documentary on the album that the guitar solo was recorded on the vocal track as there were no more tracks to record on. The song got added to the live set during the A Night at the Opera Tour in January 1976 but got removed from the set for the Hyde Park concert in September 1976, and never returned.

The next song music hall inspired song is “Seaside Rendezvous”. This is one of the most tongue-in-cheek songs Queen ever wrote, featuring no guitar or Brian at all and purely piano-driven. It features a memorable mock-instrumental bridge section featuring orchestrations of brass and woodwind as vocalised by Roger and Freddie respectively. Its writer Freddie told NME in 1975 that “[“Seaside Rendezvous”] has a 1920s feel to it, and Roger does a tuba and clarinet on it vocally if you see what I mean. I’m going to make him tap dance too; I’ll have to buy him some Ginger Rogers tap shoes.” The effect of tap dancing was actually done by the drummer with thimbles on a washboard. Unsurprisingly, the song was one of only two Queen songs not to be heard in a live environment, although the Queen Extravaganza managed to play the song live when they played the full A Night at the Opera album live.

Ironically, the other song on A Night at the Opera to not be played live is the third music hall inspired song. “Good Company” is the only Vaudeville inspired Queen song not to be written by Freddie but instead by Brian who also provides all the vocals on the track and plays a genuine George Formby ukulele banjo. The song features a rhythm backing from John and Roger, along with a guitar jazz band orchestra performed exclusively by Brian. In an interview with On the Record in 1982, Brian talked about the song; “The horn lines on "Good Company" were done on four kinds of guitars. I was very keen in those days on recreating that sort of atmosphere. I mainly got the sound with small amplifiers. I used John Deacon's little amplifier [the Deacy Amp] and a volume pedal. For the trombone and trumpet sounds. I would record every note individually: Do it and then drop in. Incredibly painstaking! It took ages and ages. I listened to a lot of traditional jazz music when I was young, so I tried to get the phrasing as it would be if it were played by that instrument.” In an interview with Kenny Everett in 1975, Freddie talked about the song; “[It’s] a George Formby track with saxophones, trombone and clarinet sounds from [Brian’s] guitar. We don’t believe in having any session men, we do everything ourselves, from the high falsetto the low bossy farts; it’s all us”. The song is one of the few Queen songs not to feature Freddie at all. And, very occasionally, Brian would play the song at his shows with Kerry Ellis with him on vocals and ukulele.

Queen’s follow-up album to A Night at the Opera is A Day at the Races and is often described as the sequel to A Night at the Opera due to there being songs on A Day at the Races that sound similar to A Night at the Opera. One song in particular on A Day at the Races, “Good Old-Fashioned Lover Boy” is alike to “Lazing on a Sunday Afternoon” and “Seaside Rendezvous”. Freddie talked about the song in an interview with Kenny Everett; “[It’s] one of my vaudeville numbers. I always do a vaudeville track, though “Lover Boy” is more straightforward than “Seaside Rendezvous”, for instance. It’s quite simple, piano and vocals with a catchy beat; the album needs it to sort of ease off.” The song was selected to represent A Day at the Races on Queen’s First EP released in May 1977, and due to the commerciality of the song was the lead track on the single. (The EP also featured “Death on Two Legs (Dedicated to…)”, “Tenement Funster” and “White Queen (As It Began)”.) The EP managed to reach the Top 20 of the charts, helped by a performance on Top of the Pops featuring a re-recorded version of the song now featuring Roger singing the bridge instead of Mike Stone (engineer for A Day at the Races). The song was added to the live set just in time for the European leg of the A Day at the Races Tour in May 1977, extending the medley and always segueing from “Killer Queen”.

“The Millionaire Waltz” is the last music hall inspired song to be recorded by Queen but isn’t necessarily a music hall song due to the number of different sections and tempos but several parts of the song especially the intro is influenced by the time signature of a waltz, a form of dance which was extremely popular in the days of music hall. In an interview with Kenny Everett in November 1976, Freddie talked about the song; “I'd like to say that actually Brian did do a very good job on, on the actual guitars, he's really taken his guitar orchestration to its limits, I don't know how he's going to, I don't think he'll ever overdo them, outdo that one actually. And John played very good bass on that, and I think it's good, oh we're patting ourselves on the back again. […] I really feel that that's worked out really well especially from the orchestration point of view, because he’s [Brian has] really used his guitars in a different sort of way, although he's done lots of sort of orchestrations before.” In the middle of the track, Brian delivers a campy, orchestrated solo which Freddie talked about to Circus in 1977; “Brian has really orchestrated it fully with guitars like he’s never done before. He goes from tubas to piccolos to cellos. It’s taken weeks. Brian’s very finicky.”

Brian later told Guitar Player; “I think that [“The Millionaire Waltz”] holds the record. There’s one bit in there which is sort of a fairground effect in the background. I think there are three octaves for each part, and six parts. I’m not sure but there must be about 18 or 20 guitar tracks. It’s a funny sound. It makes a peculiarly sort of rigid sound. I was really surprised. It sounded like a fairground organ.” The song was added to the live set medley at the very start of the A Day at the Races Tour in January 1977. When performed live the second verse was removed and always segued into “You’re My Best Friend” following the “my fine friend” line, therefore, omitting the song’s dramatic climax. Just before the start of the Jazz Tour in October 1978, the last two remaining music hall songs in the live set (“Good Old-Fashioned Lover Boy” and “The Millionaire Waltz”) got dropped in favour of newer material. It’s a possibility that “Bicycle Race” essentially replaced these two songs in the medley as it was their current single release and featured several time signatures like “The Millionaire Waltz”.

It was decided after A Day at the Races that the next Queen album would be back to basics, in essence, a quick album to make. News of the World ended up taking two and a half months to make whereas A Day at the Races took five months to complete. They had a tour booked for November 1977 so they had to be done with the album as quickly as possible but also, they had the intention of making sure that the songs on the album could be taken on the road. For these reasons, Queen would never explore music hall again. But despite forgetting a style, Queen would still continue unusual styles, even on News of the World they did punk, blues, Latin, jazz and undeniably to the biggest success, stadium rock.