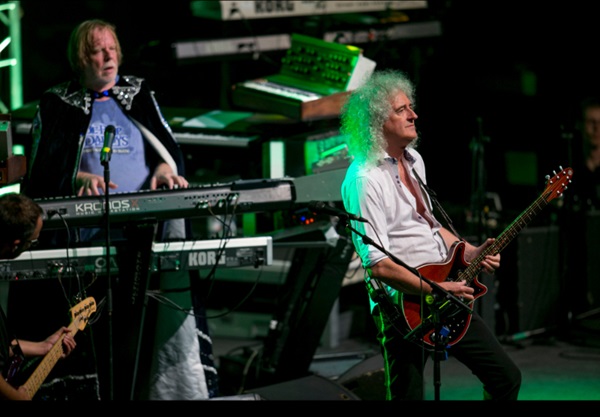 This September, STARMUS, the international festival of science and music founded by Garik Israelian and Brian May, will take place in Yerevan, Armenia.  More than 50 speakers will gather together at this sixth STARMUS celebration, including Nobel laureates, astronauts, scientists, authors, and iconic music stars, to enhance and promote science communication and music.

Co-founder of Queen, musician, singer, songwriter, astrophysicist, and stereoscopist, Dr. Brian May has just confirmed his presence in Armenia at the beginning of September 2022. Best known as the guitarist of the rock band Queen, and for his international hit songs composed for the band including "We Will Rock You", "The Show Must Go On", "Tie Your Mother Down", "I Want It All", “Too much love will kill you”, "Hammer to Fall", "Save Me" and "Who Wants to Live Forever", Dr. May is also an astrophysicist and science communicator. In 2020, he was ranked the Greatest Guitarist Of All Time by Total Guitar Magazine.

Brian May played a significant role in the Rock Aid Armenia campaign in 1988 when he personally invited many world-class musicians (such as David Gilmour, Tony Iommi) to join the project to support Armenia, but until this time he has never been able to visit.

Dr. Brian May met Dr. Garik Israelian, one of the world's leading astrophysicists, from the Institute of Astrophysics of Canary Islands,  in 1998. Years later, Israelian helped May to complete his PhD thesis and earn his PhD in astrophysics from Imperial College London in 2007.

The friendship between May and Israelian led to the collaboration with an Armenian duduk legend Jivan Gasparyan. In 2005 they had a once-in-a-lifetime performance together at the 46664 concert in honor of Nelson Mandela held in Tromso, Norway.

Brian May worked with Montserrat Caballe on a unique version of Queen’s "Is this the world we created” for her album “The Island of Christianity: Armenia & Artsakh” (www.caballearmania.com).

In 2011, Brian May and Garik Israelian initiated STARMUS – a daring and unique new form of collaboration between art and science. The concept of science popularization along with the sharing of music gave rise to a fascinating global festival that has brought together some of the most brilliant minds on the planet. Its aim is to inspire and educate the next generation of explorers and regenerate the spirit of discovery. Since then, all 5 festivals have been held (In Spain, Norway and Switzerland) and the 6th will take place in Armenia in September 2022 (starmus.com/Armenia).

The founders have published 3 Starmus books that include all the lectures and highlights of the first three festivals.

Brian May will be in Armenia for STARMUS VI festival this fall to perform from the main stage. STARMUS VI Armenia will also host world-class musicians such as Rick Wakeman, Serj Tankian, the band Sons of Apollo, Andrey Makarevich, and Tigran Hamasyan.

More about STARMUS can be found @ https://starmus.com