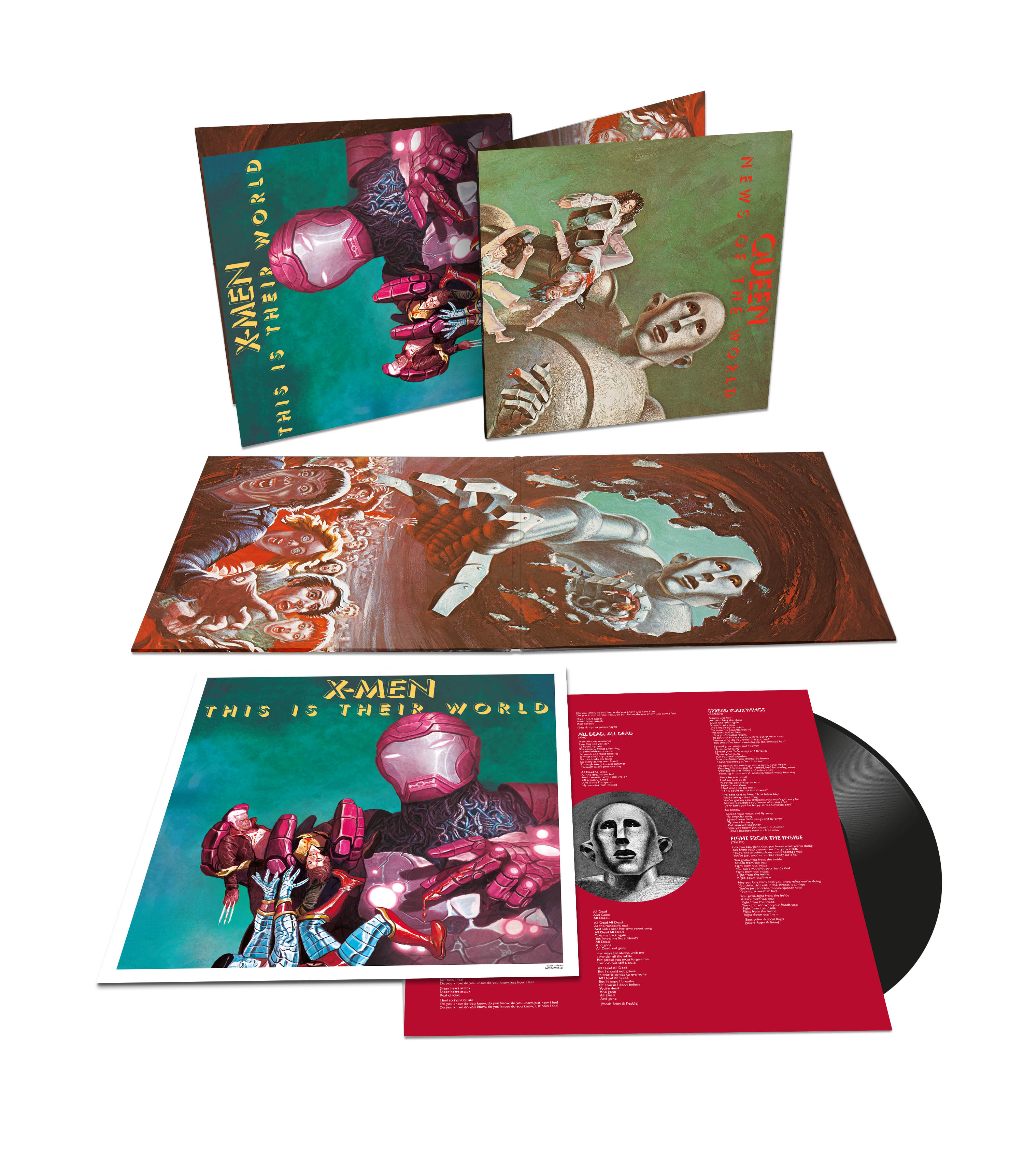 To celebrate 40 years since Queen released ‘News of the World’ on October 28th, 1977, an exclusive vinyl with Marvel’s Rock Variant tribute to the iconic Queen artwork, for X-Men Gold #11, will be available this Saturday exclusively at MCM London Comic Con. The limited run (220 copies) of the LP will have the iconic original cover on one side, and the Marvel version on the other. Designed by Mike del Mundo it shows a Sentinel holding Old Man Logan and Kitty Pride as Colossus plummets to the ground. Further rock variant covers unveiled earlier this year included Nirvana’s classic ‘Nevermind’, Guns N’ Roses’ ‘Appetite For Destruction’, The Clash‘s ‘London Calling’ and Blondie‘s ‘Parallel Lines’.

Queen's original 'News of the World' cover is an adaptation of a painting by American sci-fi artist Frank Kelly Freas. Roger Taylor saw an issue of Astounding Science Fiction (from October 1953) whose cover art depicted a giant robot holding the lifeless body of a man. The caption read: "Please... fix it, Daddy?" to illustrate the story 'The Gulf Between' by Tom Godwin. Queen contacted Freas, who agreed to adapt the image for the LP cover, replacing the single body with the four lifeless band members. A further illustration for the inner gatefold has the robot extending its hand to snatch up the petrified fleeing audience from the shattered auditorium.

‘News of the World’ is one of Queen's biggest selling albums of all time. It opens with two of the band's most indestructible worldwide hits, the Brian May-penned ‘We Will Rock You’ and Freddie Mercury's ‘We Are The Champions’, monumental stadium anthems which remain a staple of major sporting events all around the world to this day. With songs written by all four band members, NOTW, Queen's sixth album, set a new standard in stylistic diversity, from Roger Taylor’s proto-punk blast of ‘Sheer Heart Attack’ to the salacious funk-rock groove workout ‘Get Down Make Love’, to the fragrant tropical calypso-pop ‘Who Needs You’. ‘News of the World’ also features the hit ‘Spread Your Wings’, the epic rock saga ‘It’s Late’ and Freddie’s wistfully romantic ‘My Melancholy Blues’.

A special 40th Anniversary box set of ‘News of the World’ will be released on November 17th and is available to pre-order now at https://queen.lnk.to/NOTW40. Read more at QueenOnlineStore.com.