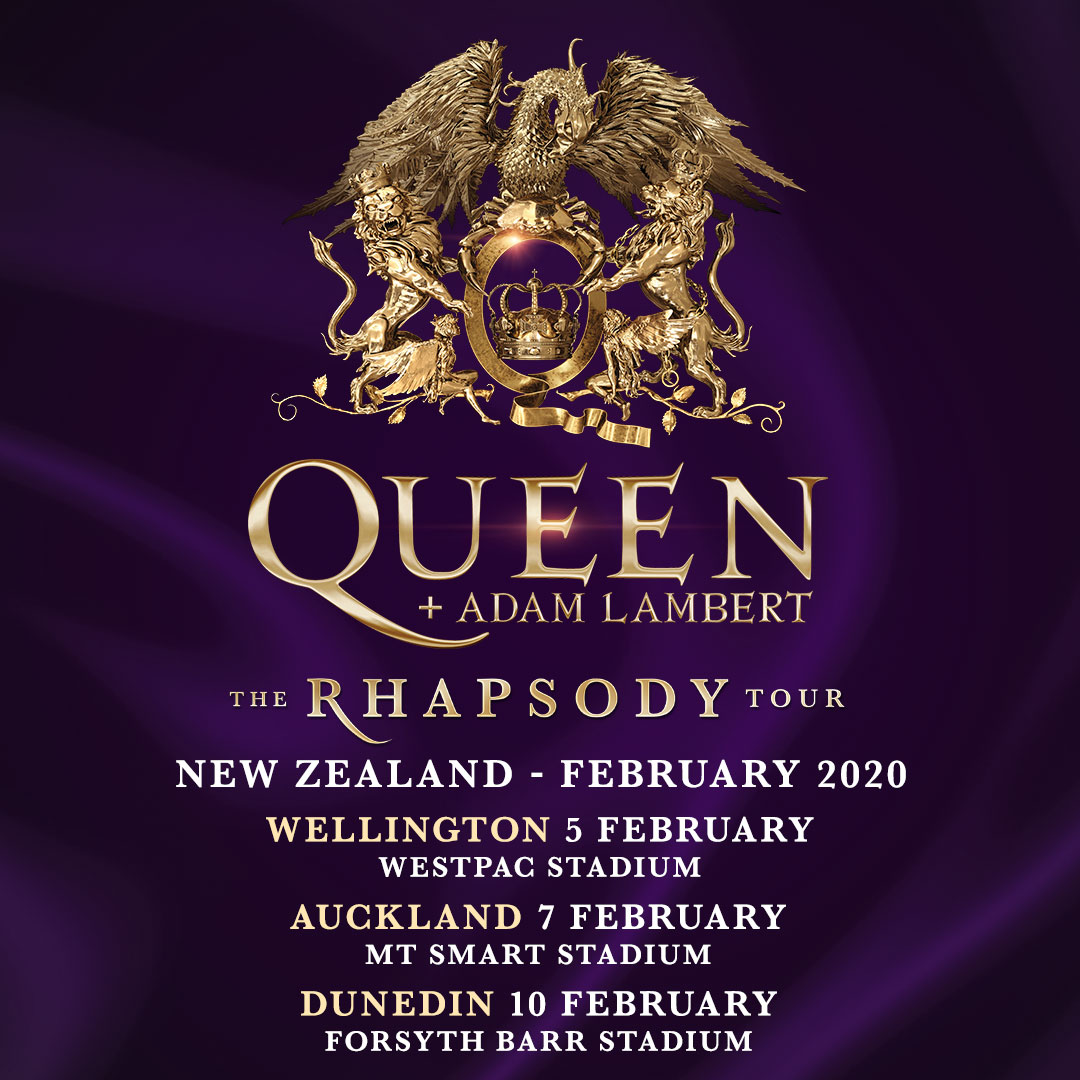 Returning To Auckland - First Time Ever In Wellington And Dunedin!

The soaring success of the film Bohemian Rhapsody, the highest grossing music biopic of all time, has proven that the love for Queen remains as strong as ever. Lifelong New Zealand fans and new converts will be thrilled with the news that Queen original band members Brian May and Roger Taylor are teaming up once more with long-time front-man Adam Lambert on lead vocals and returning to New Zealand in February 2020 for 3 giant stadium shows with a brand-new, spectacular production.

“A beautifully executed tribute to the music that has impacted so many.” – Eventfinda.co.nz

Produced in New Zealand by TEG Dainty, the epic 3 date Rhapsody Tour is set to run from February 5 to February 10, 2020 with an all-new stadium concert experience, including their first ever concerts in Wellington and Dunedin and a return to Auckland. The tour dates are:

Announcing their Rhapsody Tour of New Zealand Brian May said “This is a great opportunity. Our last tour featured our most ambitious production ever and got us our best notices ever. So we decided to rip it apart and get even more ambitious!  Watch out, New Zealand! "

Paul Dainty, President and CEO of TEG-DAINTY said: “With the enormous success of the highest grossing music biopic of all time - Bohemian Rhapsody - Queen’s popularity in New Zealand is as huge as it gets, we can’t wait to bring Queen + Adam Lambert back to New Zealand with this brand new stadium production and watch them bring their iconic songs to life.”

‘Bohemian Rhapsody’ is officially the world’s most-streamed song from the 20th Century, and in NZ, the band scored its highest-charting album in 24 years with the Platinum-selling Bohemian Rhapsody soundtrack.

When Freddie sang The Show Must Go On all those years back, even he couldn’t have guessed that Queen music would still be thrilling audiences. Next summer, the stadium stages of New Zealand will be well and truly rocked again.

“Queen + Adam Lambert is such a victory both tonally and in substance that it probably surprises even the most diehard fans of both acts." – NZ Herald

The New Zealand dates are expected to be part of a wider tour of the region taking in six stadium shows in Australia and likely also several East Asia dates.