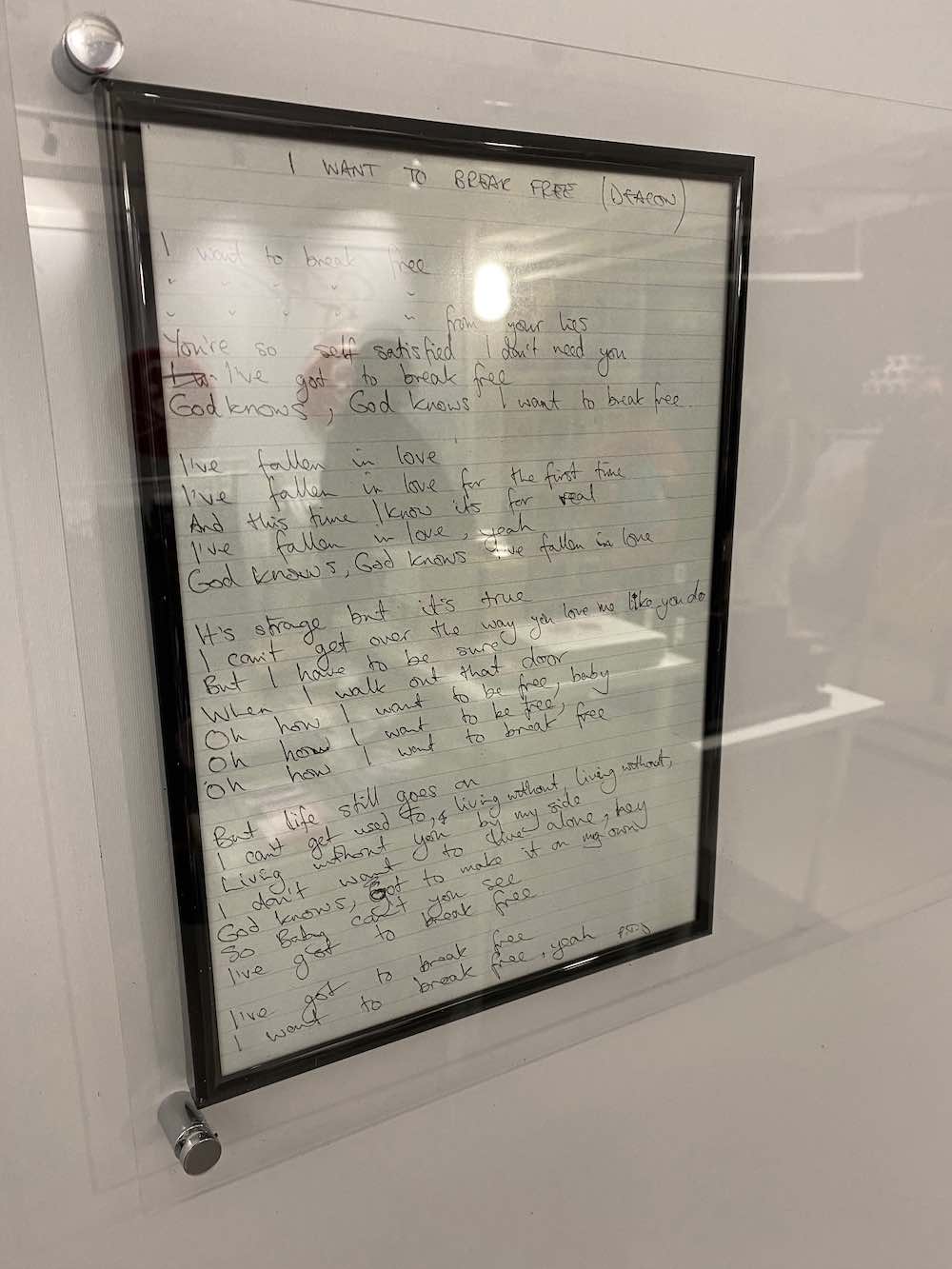 A series of framed handwritten lyrics are now on display in the Queen - The Greatest store in London’s Carnaby Street. Set to attract Queen superfans, these iconic one-of-a-kind lyric sheets have come from the original session recording master tape boxes from two of the band's most iconic songs, 'I Want to Break Free' and 'Hammer To Fall', plus much loved deep cuts 'Man On The Prowl' and 'Action This Day'.

Displayed exhibition style, these items serve as real pieces of Queen’s rich history. The fact the iconic artifacts have survived is surprising in itself - as often these would be left around the studio and collected up at the end of the working day by the studio producer or engineer. Music fans and shoppers are invited to catch a glimpse of these rare handwritten pieces of history in store now.

Visitors will find lyric sheets penned by the musical maestro himself Freddie Mercury - one of which may serve as a surprise to Queen super fans as they are in fact from a Brian May song. May would often vocalise his ideas for song lyrics and bandmate Mercury would often scribe for him before both heading into the sound booth to sing together.

I Want To Break Free:

Written by Queen’s bass guitarist John Deacon, this iconic track appeared on their 1984 album ‘The Works’. Widely known for its music video which sees all members dressed in drag, it quickly became one of the band’s most popular songs.

Man On The Prowl:

The fourth track on Queen’s eleventh studio album ‘The Works’, Man on the Prowl is a three-chord rockabilly Mercury composition.

Written by drummer Roger Taylor, the track takes its title from the phrase Winston Churchill would use to sign off his important documents. Appearing on their tenth studio album ‘Hot Space’, it is heavily influenced by the new wave movement.

The eighth track to appear on their 1984 album ‘The Works’, was written by Brian May but the lyrics on display are actually in Freddie’s handwriting. A firm fan favourite, Hammer To Fall was performed at Live Aid and featured in The Works and the Magic Tours.

The handwritten lyrics will be on exhibit until the end of December at the Queen - The Greatest store, 57 Carnaby Street, W1.

About Queen- The Greatest

Open until January 2022, ‘Queen- The Greatest’ was launched to celebrate the band’s historic five decades of music. Created in partnership with Bravado, Universal Music Group’s merchandise and brand management company, this pop-up store is designed to take you on a visual journey through one of the world’s most iconic bands' contributions to music, culture, and fashion. The shop features limited edition music releases, new product drops and exciting fashion collaborations, with each month of its three-month stint having a different theme- Music, Art & Design, and Magic.