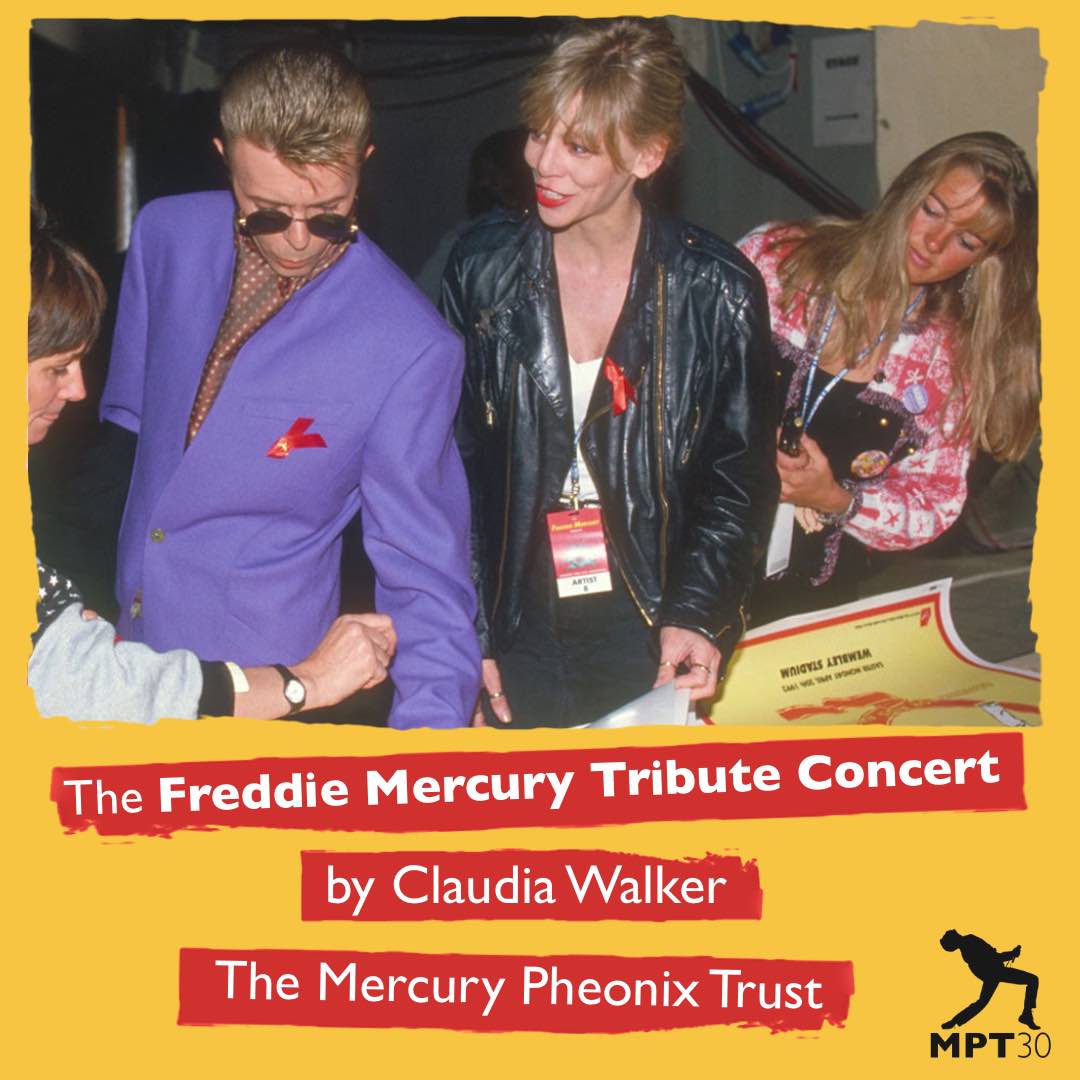 "An overwhelming tidal wave of joy and enthusiasm and raw sound."

Claudia Walker of the Mercury Phoenix Trust rolls out some wonderful stories from being right in the middle of the organisation of the tribute concert.

It was always a must, a mega tribute concert for Freddie.

Brian and Roger appeared on UK Breakfast Television in November just after Freddie died and alluded to a possible concert. They rightly slagged off journalists who, after his death, wrote such malicious, vile, and totally gratuitous things about his lifestyle. The concert, driven by Roger, was to remind people of what an extraordinary musician, performer, and showman Freddie was, and that this was what he should be remembered for and not that he had died of the scourge that was AIDS.

At the BRIT Awards in February they announced the Tribute Concert would take place on the 20th April 1992 in aid of the newly formed AIDS charity The Mercury Phoenix Trust. The venue…Wembley Stadium.  Harvey Goldsmith booked it. The Show was ON.

There was no going through management, no time. Brian and Roger got on their phones and rang the artists direct. The names began to flow in and the concert started taking shape - Def Leppard, Robert Plant, Metallica, George Michael, Elton, Bowie, Guns N’ Roses, Bob Geldof.

Because it was on the hoof, no one knew who the artists would be, so details were drip-fed as artists committed, however, ultimately it was to be a surprise, with no officially announced lineup, this was unheard of and considered seriously risky, but everyone knew this was going to be a HUGE event and the tickets simply flew.

With an eight-week run-in from scratch, the whole event was a massive undertaking. ALL the favours were called in and the whole Queen apparatus rolled into action, it was a frenzied, frenetic rush to deliver, the logistics were awesome. Gerry Stickells (Production) and Trip Kalif (Sound) flew in from LA., and all the crew put on stand-by. The Queen office in Pembridge Road became a beehive.

My kids just remember they ‘ate stew for a month’! Jim asked me if I would become his assistant and for the last week we holed up in some hotel near Piccadilly and it became his HQ, because Pembridge Road had become organised mayhem.

Looking back it truly was a massive undertaking in such a short space of time. Each artist had to be negotiated with and agreements were signed with each individually. The artists were giving their performances for free and assigning all their global rights to the Mercury Phoenix Trust for the one show and repeated versions of the show in perpetuity, but this was for Freddie, whom they all loved and revered and who had inspired so many of them. Everyone was spectacularly collaborative.

My job was to mop up all the extraneous, lesser details. This was the height of the AIDS epidemic. I happened to have read an article about the Red Ribbon project in New York and so tracked down Andy Butterfield who was just starting Red Ribbon UK and we agreed to pay for the ribbon and he would organise helpers to make and distribute them to each punter and I would get them to the artists. We placed red ribbons in the artist’s dressing rooms and I watched eagerly to see who put them on. It was such a new concept, but to see thousands upon thousands of concertgoers wearing them was brilliant. The UK Red Ribbon effectively launched at the Tribute Concert, is now an iconic AIDS symbol.

We weren't so lucky with the Quilt Project which was a cathartic healing process for families, friends, and lovers of people who had died of AIDS. We tried to get them exhibited down The Mall but the weather and security were against us. Diana Mosley, who worked on so many of the band’s costumes over the years, designed a truly amazing quilt for us in memory of Freddie which we later donated to the initiative. There is a lovely photo of Brian and Roger with Elizabeth Taylor holding it up backstage in front of the yellow Freddie backdrop, the one we still use to this day at MPT events, signed by many of the artists.

I never saw the actual live concert. I set up just by the stage exit so I could grab artists as they came off and ask them to sign the 50 Tribute posters we had made up, it featured Freddie in his classic pose - yellow jacket, white pants with a red streak down the sides, legs wide apart and clenched fist raised in the air. I hadn’t a clue who half the artists were but luckily I had a brilliant girl from DoRo who recognized them all and who, together with Jackie from the Fan Club, grabbed artists for me as they came off stage. Elton led the way, patiently and meticulously signing the lot.

The air was electric, the excitement kept building and although I couldn’t see, I was deafened by the roar of the crowd as the first notes sounded. An overwhelming tidal wave of joy and enthusiasm and raw sound. Fans and the people who loved Freddie knew they were participating in the greatest send-off of one of the truly great artists of modern times, it was awesome.

What brilliant memories; a few lovely vignettes of the days before the concert and the immediate aftermath…

At the Bray rehearsals, where all the artists turned up in jeans and t-shirts, Bowie rocked up looking immaculate. Elton was incredulous, “the bitch, she’s wearing slap” he whispered outraged to Jim.

The guy from Act Up barging into the office in Pembridge Road, wanting confirmation Axl Rose was in the line-up and demanding Guns N’ Roses, the biggest band in the world at that time, should be knocked off the bill, threatening to disrupt the concert. You can imagine Jim’s polite response. There were jitters on the night because Axl hadn’t appeared, he arrived at the stadium literally 5 mins before going on stage for his appearance with Queen and came whirling on like a dervish in a kilt and bandana to sing with Elton. To witness Axl, singing “…nothing really matters…” with Elton at the end of the show, arms around each other was a truly epic moment. What a lineup of talent giving their all for Fred, happily putting up with the backstage chaos and deprivations. No egos, no tiffs, all united in their determination to give him the most terrific send-off ever.

After the Concert, Elton gave a small intimate soiree for Elizabeth Taylor to which we were bidden. Jim and I drove down with Brian and Anita and arrived rather late, everyone was well ensconced in the sitting room, there wasn’t a soul around, so Anita and I couldn’t resist it and nipped off on a prowl. The place was lit up like a Christmas tree and there were glorious flower arrangements in every room. We felt like naughty schoolgirls, but it was such a lark, we’ve got a Tuke, who was an early English watercolour artist, but ours is of a rusty old ship, Elton’s were something else, simply beautiful.

It was a lovely relaxed evening with the aura of success hanging over us all. I still remember the squeal of delight emanating from Elton’s ‘jewel room’ when, having led Liz off by the hand, he presented her with a gorgeous ruby ring which she proceeded to show us all. The last laugh was on Anita and I because after dinner, Elton showed everybody around the entire mansion and we revisited all the rooms we had seen by stealth and had to pretend we were seeing them for the first time!

My lasting memory was bundling the kids into the back of the car and Jim’s instructions; “Stick to the car in front, don’t let anything come between you!”, as we gunned it out of the stadium, police lights flashing, powering off. The concert had been an absolute triumph and we were all high on the excitement. We roared through red lights with me sticking like glue to the car in front - what a rush, until… having just torn through yet another set of traffic lights, the children said to me “Mum, you know the police aren’t with us anymore…” and they weren’t! I don’t know how many red lights I’d gone through unescorted but the police bikes, flashing lights, and the entire cavalcade were gone and I was alone en route down a deserted M4, we weren't in the convoy anymore…whoah!