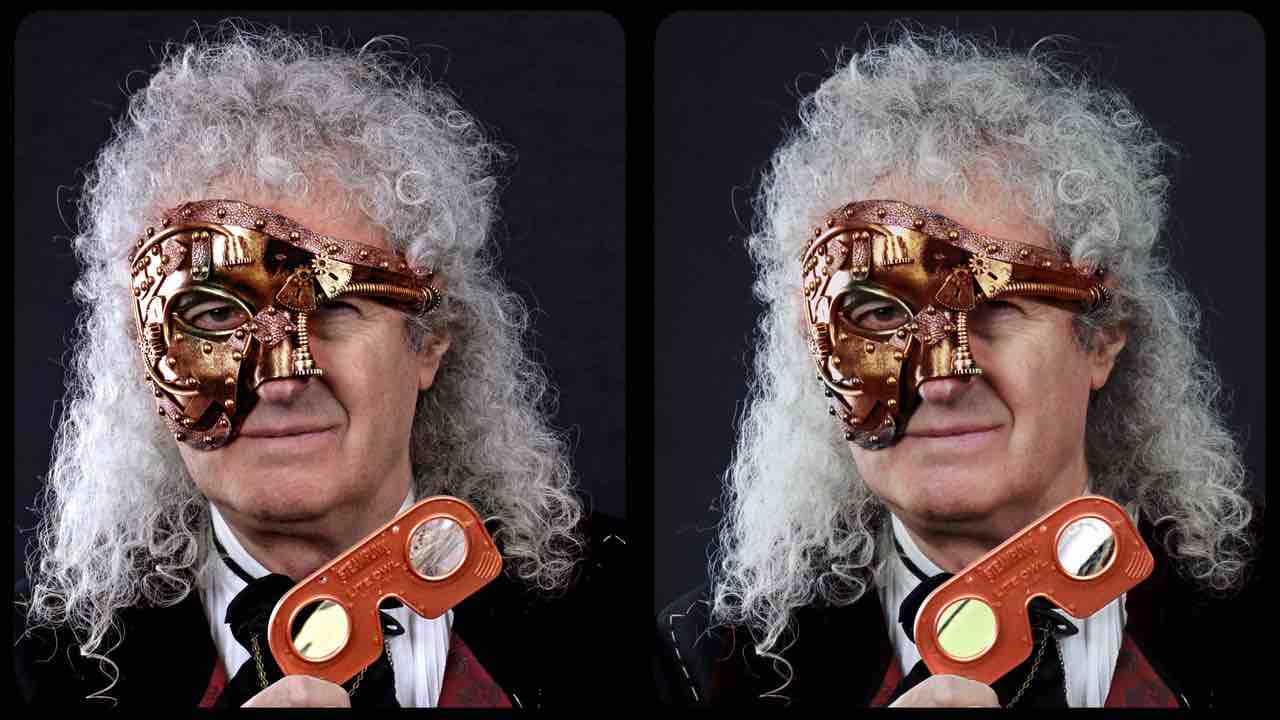 The Steampunk Owl - Out Today

BRIAN MAY reveals the story behind the new STEAMPUNK OWL OUT TODAY...just in time for enjoying 3-D ADVENTURES THIS CHRISTMAS !

Brian, founder of the 21st Century incarnation of the London Stereoscopic Company (LSC), continues to create 3-D wonders from lockdown.

Echoing Victorian and Steampunk styles, for the launch of this new viewing instrument, Brian dons Steampunk attire, in a photo session in which he holds the first Steampunk OWL off the production line.

May has until now kept very quiet about this new viewer, which has been in development for nearly a year. It was designed to fulfil a perceived need for a quality viewing device for side-by side stereo pictures compact and light enough to be always carried around in a pocket or worn around the neck with a cord. The existing LITE OWL was designed for viewing stereos in books, and has also been used as a travel stereoscope, but its one-piece construction in Acrylic material made it too brittle to survive in some trouser pockets ! This new device is rugged, moulded in metallic-effect Polypropylene with acrylic lens inserts. Geometrically it is closer to the classic OWL design, with a slightly longer focal length than the LITE OWL, making 3-D viewing for many people just a little easier.

Why SteamPunk ? Brian says “The style of the viewer was inspired by the current Steampunk genre - a fanciful combination of Victorian style and pre-combustion engine technology. Steampunk has been described as how the World would have looked if the Victorians had managed to get into Space, as Jules Verne and H.G. Wells dreamed. Stereoscopy – now known as 3-D – was invented in 1832 by Englishman Charles Wheatstone, and this new instrument, firmly based on the genius of his designs, seemed a perfect opportunity to incorporate steampunk motifs into its appearance. The design also owes a lot to my old friend Chris Dodman at S.B. Westons in Sunbury-upon-Thames, who collaborated on the design of the very first ‘Classic’ folding focussing OWL in 2009. It’s manufactured by my friends in China, Jade Productions, who have also printed our most recent LSC books. The first limited edition Steampunk OWLs arrived today - a introductory limited edition in a special themed cardboard packet. They will be flying out very soon !!!"

Brian's London Stereoscopic Company currently presents stereoscopic images (as stereo cards and illustrations in books) using the highest resolution printing technology available today, and viewed through this new device, these visuals are guaranteed to spring to life in glorious 3-D, just as in Victorian times. The Steampunk OWL can also be used to view 3-D videos and VR content on any smartphone.

The LSC's mission is to inspire a new generation to embrace stereoscopy, by sharing the world’s greatest 3-D images – from Victorian times to the present day. The cutting-edge Steampunk OWL will be a welcome addition to the line.

STEAMPUNK OWL, created by Brian May, £7.50, Out today and available @ https://shop.londonstereo.com/OWL-STEAMPUNK.html