Queen + Adam Lambert: “It breaks our hearts…”
UK & European Rhapsody Tour again postponed
But the show goes on in 2022 – with two dates added in Glasgow - ON SALE NOW

Queen’s Brian May and Roger Taylor, plus singer Adam Lambert, spoke today of the “heartbreak” at having to once again postpone the highly anticipated UK and European dates of their Rhapsody World Tour.

Following a sensational run across Asia and Oceania last winter, Queen + Adam Lambert were originally set to rock the UK and Europe in Summer 2020. During the band’s Spring break, however, the coronavirus outbreak left them no choice but to prioritise the safety of fans, crew and venue staff by postponing the dates until 2021.

Now, with the COVID-19 pandemic still far from resolved, the band are forced for a second time to reschedule the tour dates, moving them to 2022. “Under continuing Europe-wide Covid restrictions there’s no possible way the tour can go ahead as planned for this year,” Queen + Adam Lambert said today. “The prospect of again not being able to look forward to performing and getting to experience those wonderful audiences is just heartbreaking.”

To ease their loyal fans’ disappointment, Brian, Roger and Adam have announced a new and expanded set of 2022 dates for the UK and Europe Rhapsody shows, when they hope it will finally be safe to perform for large audiences.

While the tour remains set for the original May – July period, the 2022 dates will now kick off in the UK, starting with two shows at the Manchester MEN Arena on May 30 and 31. British fans will also welcome the addition of two extra UK shows at Glasgow’s Hydro venue on June 2 and 3 - both dates are now sale here.

The full list of the now 29 rescheduled shows will, as before, include a marathon 10-night residency at London’s The O2, plus a pair of concerts apiece in both Manchester and Birmingham (and now Glasgow).

Promoters for the Rhapsody Tour confirmed today that all previously purchased tickets continue to be valid for the corresponding rescheduled shows. Ticket holders will be contacted by their point of purchase for information on ticket exchanges for the new dates. New dates can be found at QueenOnline.com. “We wish to make it clear. None of the shows from 2020 and 2021 have been cancelled, just re-arranged due to COVID-19. We really do hope that as many people as possible who were booked for those original dates in 2020 will still be able to join us for the shows.”

This time last year, Queen + Adam Lambert were reaching the end of the Rhapsody Tour’s Japan leg and heading out for eleven massive Australia and New Zealand shows. “After starting off 2020 with an amazing run of shows playing to audiences of upwards of 50,000 in a single night,” say the band, “the cancellation of the Europe shows that should have followed last summer was a huge disappointment.”

Brian May adds: “Those incredible scenes at those concerts now seem like an impossibly distant dream. One minute we are out in Australia strutting our stuff and interacting with thousands of happy people, next minute we are stuck in the house. We were so lucky to be able to complete that tour, running just ahead of the wave that was about to break on us.”

Despite the wrench of being off the road, the band have certainly made the most of their enforced downtime, with Brian, Roger and Adam managing to remain active throughout 2020. Early in the first lockdown, the three artists connected up, triggered by a guitar track Brian posted on his Instagram grid. Working remotely, Roger and Adam added their parts to Brian’s track, leading to a new version of We Are The Champions, their pioneering lockdown single You Are The Champions. With the proceeds going to front line health workers, the track became a musical cry of support for all who were fighting the Coronavirus.  The video featured many scenes from Covid wards, and included Roger’s very own doctor daughter Rory Taylor. The  video was viewed nearly 4 million times during its first month on YouTube, with the proceeds going towards the Covid-19 Solidarity Response Fund for the World Health Organisation.

Roger Taylor responded to the stay at home policy writing and recording his personal reflections of the time with an atmospheric solo single “Isolation” which gave him a No.1 rock chart single and video.

Staying engaged with their fans, the band then returned to YouTube with a Tour Watch Party offering highlights of Queen + Adam Lambert performances from previous tours and festival gigs. The enthusiastic response led directly to the compilation, mixing, and release of their first album together, Live Around the World, presented in CD, DVD, Blu-ray and vinyl packages. A concert version of the movie is now available to stream via download or rental.

Speaking on the release of Live Around The World late last year, the band said: “As we all grapple with the challenge of creating live shows in a world dominated by a formidable viral enemy, it seemed the perfect time for us to create a collection of hand-picked live highlights from our Queen shows over the last seven years with our brother Adam Lambert. As you watch and listen to these tracks you’ll be journeying all around the world with us, and experiencing a complete virtual live set”.

Uplifting and defiant in challenging times, Live Around The World proved a welcome positivity booster for fans as they continue to wait for the Rhapsody tour to resume. It also gave Queen + Adam Lambert a No 1 album on week of release in the UK and elsewhere around the world – marking Queen’s first UK No 1 album in 25 years, their 10th in total and Adam’s first time at the top of the chart.

On getting back to performing live again Roger Taylor says: "When we do eventually get to play in front of live audiences it will be with a ferociously renewed attack and we shall revel in the wonderful experience of actually interacting with them again."

Frontman Adam Lambert said: “It’s so disappointing to have to postpone again, but safety comes first, and we look forward to spring 2022 when we will be back, better than ever.”

The postponement of this year’s tour dates is especially disappointing for the band, who were looking forward to playing the shows as part of a significant landmark for Queen. With fifty years now having passed since the 1971 recruiting of John Deacon, completing Queen’s classic line-up, 2021 marks a Queen Golden Jubilee that the band was hoping to celebrate with fans.

Nevertheless, The Show Must Go On – and it will in 2022 when Queen + Adam Lambert return to touring and embark on their next chapter together. 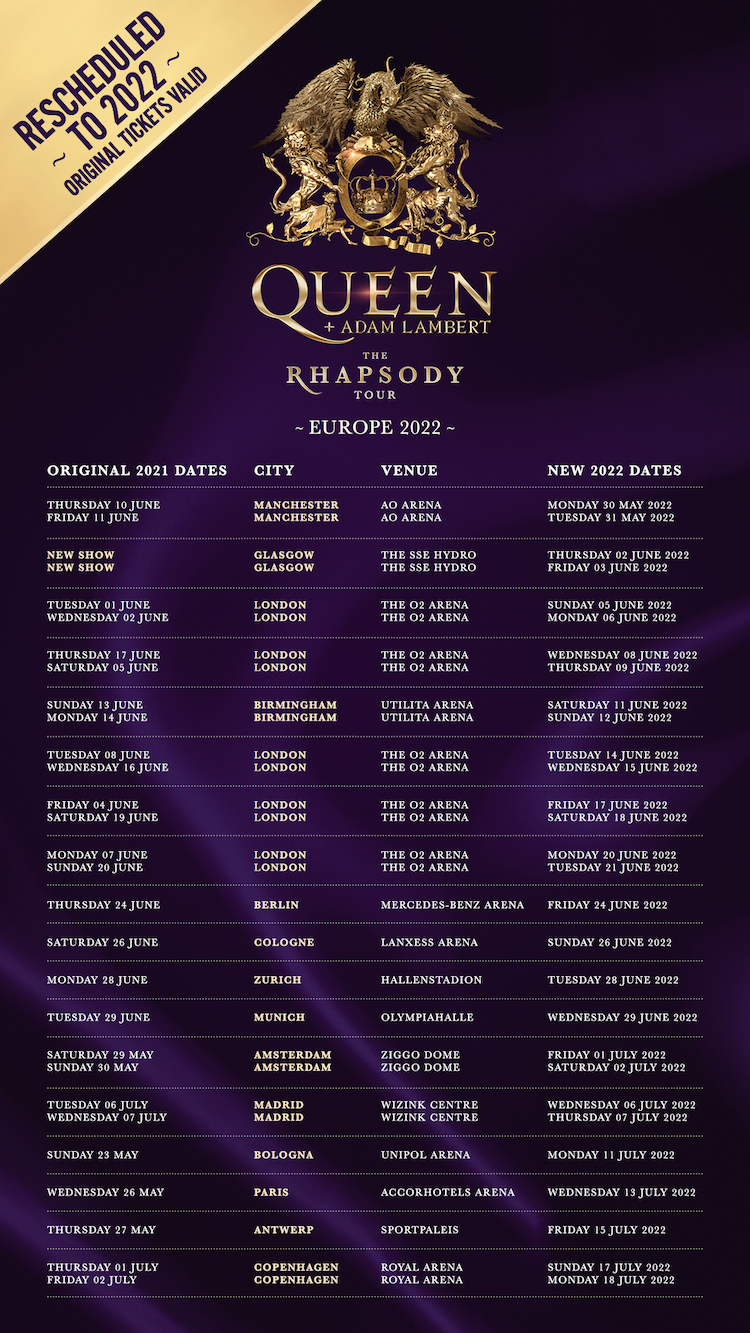