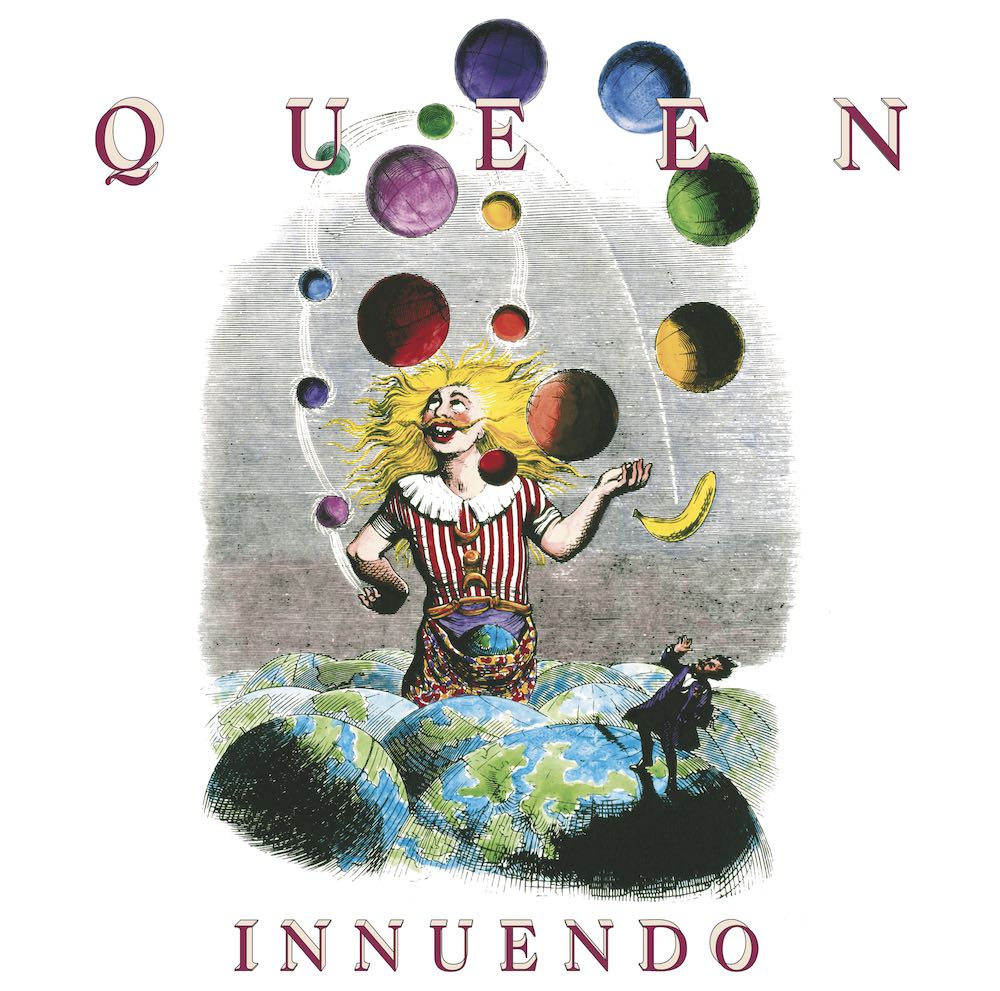 A look back at how Queen roared into the 1990's and celebrated their twentieth anniversary with the release of the Innuendo single and album, both of which entered the UK charts at number 1.

“Freddie always used to say, 'Oh Brian, you're f**king making me tear my throat to bits again'. So with The Show Must Go On I remember apologising 'I don't know if it's possible to do it full voice., but obviously that would be great'. And he went 'Oh for God's sake, roll the tape'. A couple of vodkas, and he went for that line, which is outstanding for him to reach those notes.”
Brian May.

This week’s Queen The Greatest marks Queen roaring into the 1990s with their 14th and penultimate studio album, the smash hit Innuendo, and looks inside the Montreux studio sessions of March 1989 – November 1990 carried out under the shadow of Freddie’s increasing frailty, but remembered by Roger Taylor as “strangely, a very happy album to make.”

Dave Richards, Producer: “With Innuendo, somebody suggested that they should play live, and they thought that was a good idea. So we set them up in the Casino Hall (Montreux) and the studio itself was linked with 54 mic lines going down and we could record groups in there.

“They actually created a song live, by improvising until it became a song. And that's how it started.”

Roger Taylor: “We were working abroad together in Mountain Studios. I think Freddie had then decided he actually loved Switzerland, and he didn't want the studio to be under the lake, which is where he wanted before.”

Roger Taylor: “There's some very good stuff on innuendo, and it was quite live as well, and I think a bigger studio is good for us.”

Brian May: “There was a feeling of sort of re exploring our youth almost buried in there somewhere. And it was fun.”

Brian May: “We were all working really flat out on everybody's ideas and not being kind of possessive about things, so there's quite a liberation there.”

John Deacon: “I think we're all throwing in different ideas. There's a lot more teamwork, but people still get very precious about the songs that they feel they started off with.”

Dave Richards: “Freddie was singing down there live as well with them, and there was absolutely no impression from me that he could have been sick. He was full of beans and singing away.”

At the beginning of 1991, the Innuendo album and single were released and both entered the UK charts at number one. It was also Queen’s first album to go gold in the US on release since The Works in 1984.

Brian May: “The new album is great. I think it's the best one for quite a long time. Very often you put out an album you think, but I wish we'd done this, you know. This one I feel quite happy about and I can listen to it without any problem. I like it a lot.”

Brian May: “Actually, we had some fantastic times, and I think we got over our stupid, you know, going out the whole time business, you know?”

Brian May: “And we were a very close knit group like a family, and we would work in the studio until, usually until Freddie got very tired.”

Brian May: “I did a complete demo for The Show Must Go On, including that very high part, you know, 'On with the show'. And I said to Freddie, because Freddie always used to say, 'Oh Brian, you're f**king making me tear my throat to bits again'. So I remember apologising in as much as I said, 'Look, I've done it in falsetto. I don't know if it's possible to do it full voice, you know, but obviously that would be great'.”

Brian May: “And he went 'Oh for God's sake', you know, he said, 'roll the tape', a couple of vodkas, and he went for that line, which is outstanding, you know, for him to reach those notes. He's reaching heights he's never done before. He's just finding the energy from somewhere? And the voice on The Show Must Go On is incredible. I never heard anybody sing like that in my whole life. And he rose to every challenge and seemed to reach heights that he never even reached before.”

This recording experience, despite the challenges we now know the band were facing, proved to be hugely productive, and Innuendo marked the band's 20th anniversary in style, delivering a powerhouse of song writing and recording in the finest Queen tradition.

Next week: The Guitar Solo