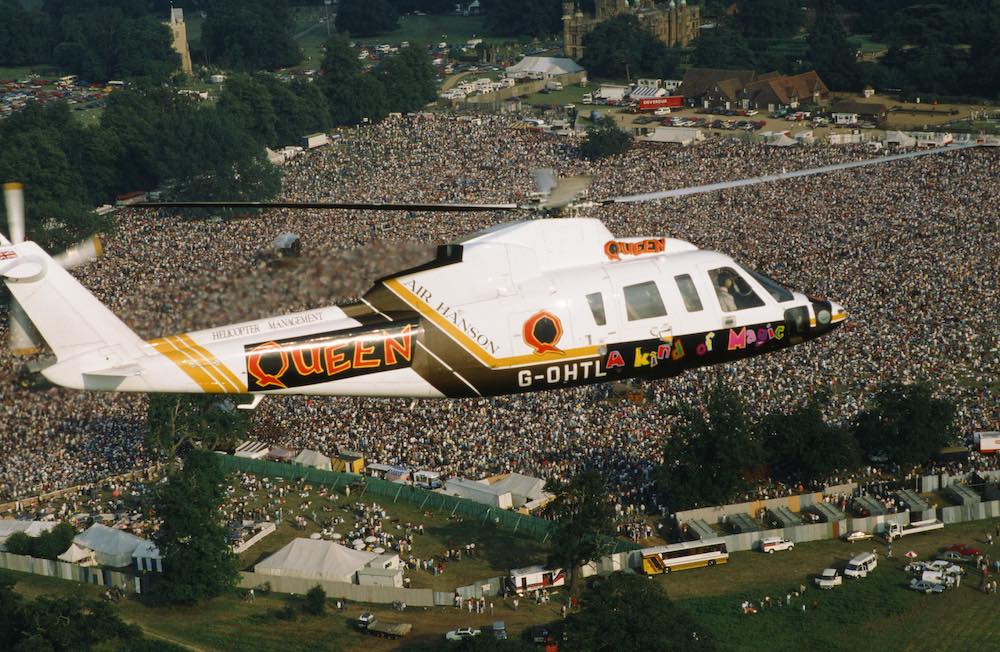 Queen arrive for their final 1986 concert at Knebworth Park, U.K., in the ‘Magic Helicopter’ customised with the art from the band’s A Kind of Magic album.

Continuing our look at Queen's record-breaking Magic Tour. As the tour reaches its climax, and within just a few short weeks of each other, Queen play three of their most memorable and iconic gigs.

“We always believed that we had something special and that we could do anything that anyone else did. That’s the kind of belief that kept us going in the early days. But I don’t think we quite believed what would happen. I don’t think we even knew what was possible.” Brian May.

“I think that in some form or another the music will always continue now, I think they’ve reached that status. Nobody knows whether Mick Jagger will be singing when he’s 65, or Queen will be performing as Queen. I think that the Queen structure will continue on, and they will continue to make music.” Jim Beach, Manager.

Queen The Greatest returns this week with a second installment revisiting the band’s sensational and record-breaking 1986 Magic Tour.

Having already blazed a trail with 14 sold-out shows around the UK and Europe setting milestones along the way, Queen returned to London in July 1986 to play two nights at London’s 72,000 capacity Wembley Stadium – the site of their extraordinary and historic performance at Live Aid the previous year.

Yet despite the band having reached an all-time high popularity, they weren’t taking it for granted that their first home ground shows since Live Aid would sell out…

Brian May: “We’ve been away a long time and tickets will go on sale for Wembley on Friday. And it’s always a time when you sort of go ‘I wonder what is out there? I wonder if they still do want to see us?’ You never know. We’ll only know once the applications start coming in.”

The close on 150,000 tickets on sale sold out in a matter of hours, and these memorable nights were captured on camera and remain one of Queen’s best-loved live shows to this very day.

Roger Taylor: “I think Wembley was a tough gig, because of the actual physical size of it. You’d better go down well there, you don’t want a quiet audience. I’ve seen people die there, because you won’t hear them. If it’s a ripple, a ripple really won’t register. So you need a roar. They call it the Wembley Roar. And it was OK for us. You knew you were going to have to work quite hard at Wembley.”

Then as Queen hit the road once again, a new adventure awaited them…

[Interviewer]: “I think there’s only one country you’ve never been to before?”

[Interviewer] “So that is new ground?”

Roger Taylor: “It’s great, yeah. We’re very excited about that. There are people from all over the Iron Curtain bloc coming. They’re selling tickets in…or whatever they do over there. Do they sell tickets?”

[Interviewer] “I presume so?”

Roger Taylor: “Or give them away? I don’t know, I don’t know. Whatever they do, people are coming from Poland and Czechoslovakia, and a lot of the Eastern Bloc, which is very exciting. ‘Cos the Russians would never let us in.”

Making history as the first artists to ever perform anywhere behind the Iron Curtain, the band’s July 27 show would be played to an audience of over 80,000. Filmed using nearly every available 35m television camera available in the country the concert would go on to further make history by being broadcast at the end of the year across the Communist Bloc including Czechoslovakia, East Germany, and Yugoslavia as well as being shown in 59 Hungarian cinemas on New Year’s Day 1987.

Drawing to a close with only dates still to be played in France and Spain, the overwhelming demand back in the UK prompted promoters to hastily add one last massive show to the schedule – at the famous Knebworth Park, where the band would end their tour performing an open air show before an audience variously estimated at between 160,000 and 200,000. Since the start of the tour, June 7, Queen would end up playing to a fraction over one million people.

Jim Beach, Manager: “I think that in some form or another the music will always continue now, I think they’ve reached that status that their music will be remembered. How much longer they record…goodness only knows. Nobody knows whether Mick Jagger will be singing when he’s 65, or Queen will be performing as Queen. I think that the Queen structure will continue on, and they will continue to make music. How it will be…nobody ever knows that, really.”

Freddie Mercury: “We’re the only sort of, the four Grand Dames that have actually stuck it together.”

John Deacon: “Yes you do ask how long it’s going to go on really, and we’ve been doing it a long time now, and I don’t know. If I could tell the future, life would be quite boring I think.”

Signing off at the close of the band’s August 9, 1986, Knebworth concert, Freddie thanked the crowd saying: “Thank you lovely people, you’ve been a wonderful audience. God bless you. God bless you, goodnight, thank you.”

No one knew this yet, but this was to be Queen’s last-ever public performance with Freddie.