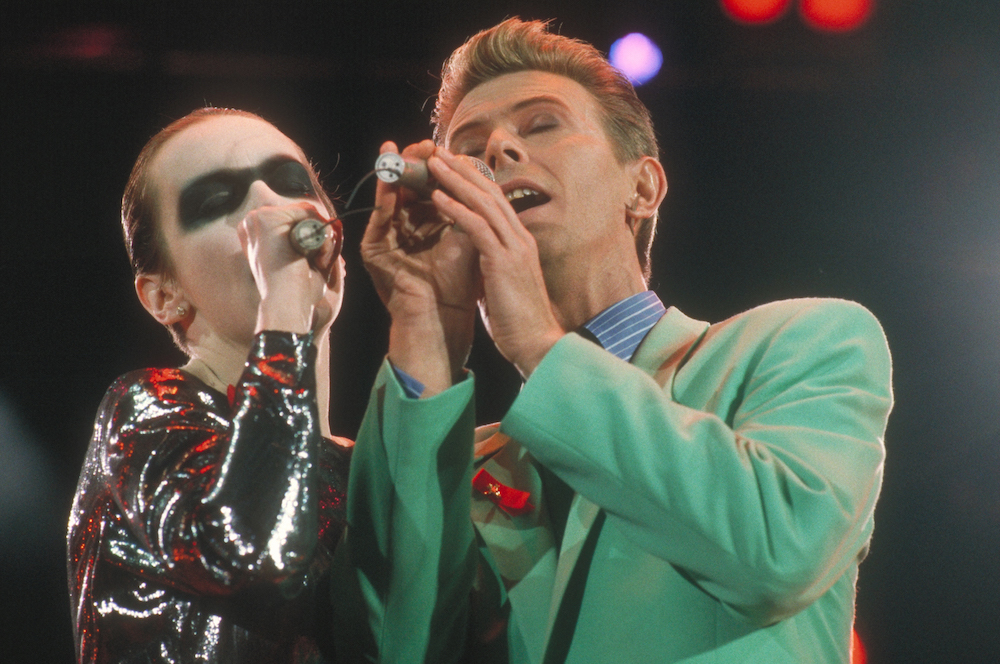 Queen The Greatest Episode 24. Under Pressure

Celebrating what is, for many, the greatest collaboration in rock history.  The story of how Queen were joined in Montreux, Switzerland, by David Bowie, and a night of fooling around in the recording studio resulted in a number one single.

“Well, I think the process was we were all drunk, and in the studio, and were just for fun playing all sorts of old songs, whatever came into our heads. David said, “Look, hang on a minute, why don’t we write one of our own?”  Roger Taylor.

“And then we went for a pizza and he forgot it.  Completely escaped his mind!

We got back, and I remembered it.”  Roger Taylor.

Queen The Greatest, this week celebrates one of the biggest collaborations in rock history, Queen and David Bowie’s Under Pressure.  Brian May and Roger Taylor talk in recent interviews about that momentous night and how that famous riff was almost lost, with additional rarely seen footage of Bowie talking on how he recalled it (“it was peculiar”!).

By 1981, Queen had bought the famous Mountain Studios in Montreux – and it was during one recording session there, that Studio Engineer Dave Richards made an impromptu phone call.

David Bowie: “They were recording there and, David (Richards) knew that I was in town, and phoned me up and asked me if I’d come down if I’d like to go down and see what was happening.  So I went down and these things happen, you know, suddenly you’re writing something together and it was totally spontaneous, it certainly wasn’t planned. It was peculiar!”

Roger Taylor: “Well, I think the process was we were all drunk, and in the studio, and we were just for fun playing all sorts of old songs.  I remember a couple of old Cream songs, and whatever came into our heads and I think David said, “look, hang on a minute, why don’t we write one of our own?”

Freddie Mercury:  “We were fooling around and then just sort of jamming with tracks and suddenly we said ‘why don’t we just see what we can do on the spur of the moment?’”

Producer Reinhold Mack:  “Then there’s the pressure of his majesty, David, being there, and everybody wanted to look suave and quick with ideas and stuff.”

Roger Taylor:  “And then we went for a pizza and he forgot it!  Completely escaped his mind.  We got back and I remembered it.”

Roger Taylor:  “David’s idea to put all these clicks and claps, and then it just, the sort of track grew.”

Brian May:  “And by that time David was very impassioned with it and he had a vision in his head I think.  It’s quite a difficult process and somebody has to back off, and actually, I did back off, which is unusual for me.”

The result of that long night was Under Pressure, and when released in October 1981, gave Queen their second UK number 1, and became a massive hit across the globe.

Due to touring commitments, the band were unable to make a promo video – and so Director David Mallet captured the essence of the track in a beautifully crafted montage of archive footage.

The song became a permanent feature in subsequent Queen shows and was one of the stand-out moments at the Freddie Mercury Tribute concert on April 20, 1992 where David Bowie and Annie Lennox joined Roger, Brian and John for a truly spine-tingling performance.

Without a doubt one of Queen’s biggest hits, and it was no surprise when readers of Rolling Stone magazine recently voted it as one of the greatest music collaborations of all time.