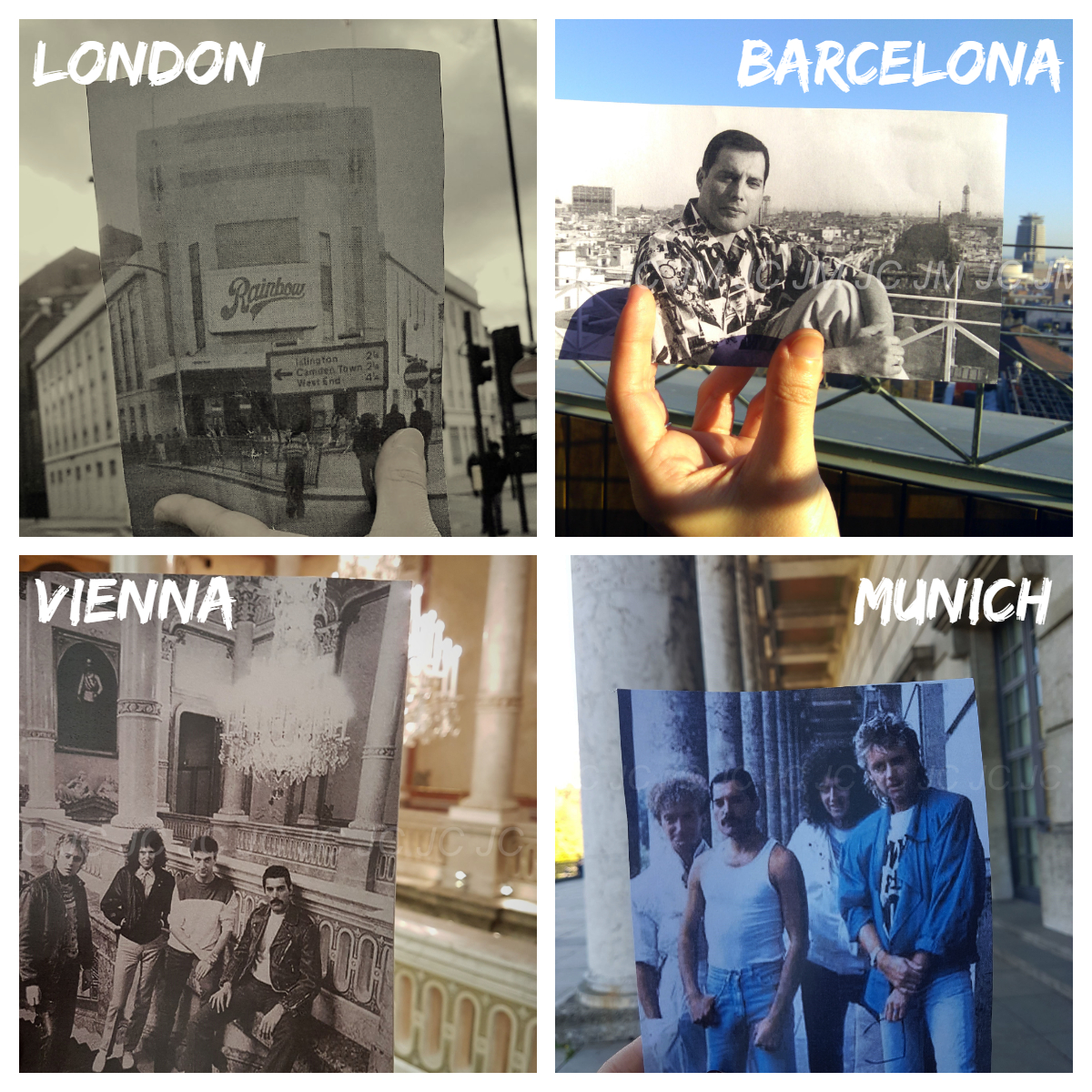 It all started at the beginning of 2019. My mum, who is 72, and I share a big passion for Queen and I thought it would be nice to take her to London and visit some Queen related locations. She cannot walk for days and days, so I first planned a very short trip with only a few relevant Queen places in mind, such as Garden Lodge and Imperial College. But although I insisted, she did not want to go as she does not like travelling. I had already been searching for flights and accommodation and the idea of going there and visit these places grew in my mind and there was no turning back. So I decided that I would go on my own. I started looking for information and pinning relevant places in a google map, almost 30 locations, and I thought, OK, let’s do it! I printed a few photos, took the map, 2 mobile phones, and external batteries and off I went.

In no time I was on a bus in London heading to the hotel in Shepherd’s Bush. It was dark, but I could see the lights of the Hammersmith Odeon from the bus and I got very excited! After such a long time reading books and watching videos about Queen and Freddie I was actually seeing all these familiar and meaningful names everywhere: Earl’s Court, Kensington, Hammersmith…and it felt surreal. And the 3-day adventure started. I had planned to visit all the locations by areas and I covered Hammersmith and Kensington on the first day, the second day I went to further away places such as Ealing and Feltham and I spent the last day in Central London, the Rainbow Theatre and Abbey Road. I walked around 20 miles overall. I must say that I don’t really like travelling alone, but this time it was so exciting, and I was so busy that it felt great. London is an amazing city and it’s very easy to move around, public transport is fantastic, and I did not have any problem. Moreover, I met a few other fans at Garden Lodge and also outside the Astrofest Conference, where we were very lucky to meet Brian May for a few minutes and take a picture with him. The icing on the cake, really.

The whole trip was amazing, and the feelings I experienced in many of the locations were just…a kind of magic. Each day I had a different Queen song playing in my mind and I was very much enjoying this private Queen universe many of us live in. I took lots of photos and I thought, why not create a blog instead of just posting photos on social media? One of the things that Queen has provided me is creativity, Queen makes me want to sing, to play the piano, to learn musical language…and now: to travel and design a website! So I started the blog www.queenlocations.com and I was quite happy with the results. I created it as a nice memory for myself but also to help other fans who might want to do a similar trip, as there is a lot of information on the internet and books, but you must devote quite a long time in order to put it all together. Having it all explained in different posts, with exact addresses, brief descriptions, and photos could help other fans.

After this first lovely experience, I came back to my hometown, Barcelona, and I thought: oh wait, there are also Queen locations in my city! This prompted me to work on another post for the blog that would be called “Queen in Barcelona” and this is how the idea of expanding to other cities originated. The Barcelona post seemed to be very straightforward, only 4-5 relevant places that I could visit easily instead of lazing on a Sunday afternoon. This time a friend of mine came along and after taking photos of places such as concert venues and the Magic Fountain of Montjuïc where Freddie and Montserrat Caballé sang, our aim was to locate the exact place of a photo of Freddie in a terrace with the views of the city behind him. It was like playing Geocaching (for those who are not familiar with this, Geocaching is a game that consists of finding hidden little containers following GPS coordinates). After quite a lot of research with many maps, emailing a Catalan writer that had interviewed Queen in the past, and discussing viewing perspectives of the photo, we located the place: it had to be from a luxurious hotel located in La Rambla. And it was. The receptionist was very kind and showed us the presidential suite where Freddie had stayed and where the photo was taken!! It was such a great achievement that we were thrilled. So a second post was ready for the blog.

A few weeks later I had to go to Bratislava due to work and guess what: Vienna is only 50 minutes away by bus and I knew Queen had visited the city many times, so this seemed to be another opportunity to keep searching for locations. In this case, the most relevant one was the photo that the band took at the stairs of the Imperial Hotel. I emailed them and asked for permission to get inside and take a few photos, and in no time there I was, sitting on the same place where Queen once sat. What a great feeling it was, full of nostalgia and happiness all at once. I also visited the main concert venue, other hotels, and the Hard Rock Café in one day before going back to Bratislava to work, with a third post for the blog ready.

Finally, I thought that Munich is a very important place for Queen and Freddie, and the Easter break was approaching…as I had enjoyed the previous trips very much I decided to travel on my own again. I have recently come back from Munich, after spending 3 days in this wonderful, clean, and elegant city that was so meaningful for Queen. Freddie is still very present there, there are photos of him in several restaurants and pubs. And the former Musicland studios is another magical place to visit, although the studios do not exist anymore, and you can only see the huge building, at the basement of which they were located.

According to my friends and family, all this is quite crazy and weird, but I have enjoyed every minute of this locations’ adventure and I am sure you can relate and understand what it means to see those places with your own eyes. I have another work trip to Japan planned, so I believe there is going to be another update in the blog soon! The show must go on, right? I really hope you like the blog and I encourage you all to visit these places if you have the chance to do so. It is a different way to go sightseeing while remembering, and getting to know a bit better, our favourite band.