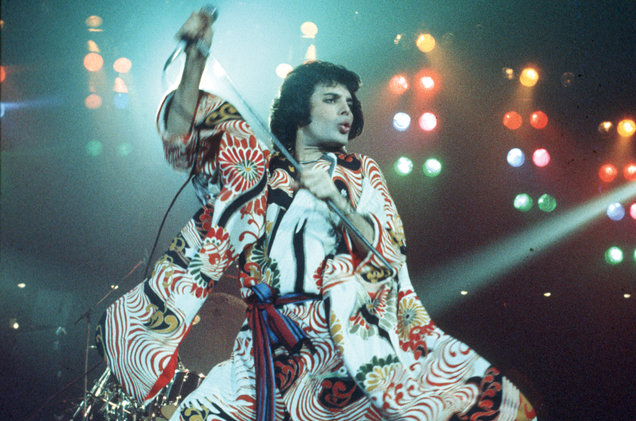 “I’m just a singer with a song”, Mercury once pitched from the top of his voice in his delightful redemption of ‘In My Defence’. However, approaching the 27th anniversary of his untimely death in 1991, people have not forgotten. Au contraire, the public only now starts to realise how truly magnificent Mr Fahrenheit actually was. The collateral damage of this lasting presence of Queen and their singer in the everyday life was visible In July 2016: Donald Trump used the track ‘We Are The Champions’ during one of his rallies. Understandably, Queen, fans and anyone with a sense of modesty took offence of this.

As I was reading some of the comments about this incident, I noticed something interesting. Quite a lot of people saw the sheer hypocrisy of using Queen music at a Republican Rally. One of them was Adam Lambert, who as you know joined forces with Brian May and Roger Taylor, providing the audience with a stunning show. The singer, who is openly gay, commented on Twitter that: “If your political party spends decades treating gay people as second-class citizens, guess what: You don’t get to use Freddie Mercury’s music at your convention”. Sounds about right. I was more surprised to see people take notice of the ethnic roots of Mercury. Him being an immigrant certainly didn’t help the arguments pro use of Queen’s music in Republican Rallies

A room full of conservatives watching their saviour Trump emerging to the music not only of an immigrant but a gay immigrant. Sounds more like a left-wing activist pulling a practical joke on his contesters from the other side of the spectrum.

This got me thinking: Mercury being a British rock icon is not an uncomplicated status. As a Parsee immigrant, he fled Zanzibar in 1964, bringing him to Britain for the first time at age 17. Add the ‘issue’ — because that is what it was in the 1960s and 70s— of homosexuality to the equation et voila: there we have the most improbable Rockstar ever. The question emerged: which postcolonial and sexual identities show in Mercury’s work and how did the media portray these both during his lifetime and in the memory of the frontman.

First of all, allow me to introduce myself. My name is Milan Vandermeulen, an MA student of History at the University of Leuven. I am currently finishing my MA Thesis on the subject of Freddie Mercury historically analysed through postcolonial and sexual identities. In this quest, Mercury’s former PA Peter Freestone was kind enough to contribute, which turned out to be extremely helpful. A special thank you goes to him.

Reading into the subject, very soon the standard narrative showed: he was either proud of his roots and sexuality, or ashamed of it. I find this a weird mode of thinking: is it really the one or the other? True, he didn’t publicly ‘announce’ his homosexuality, but saying he never discussed it is simply not true. As far back as 1974, he declared being ‘gay as a daffodil’ when asked if he was queer. Surely the humour in this statement is high, but it’s also quite an explicit coming out. A month later the singer did another interview for this same magazine, NME, and brought: a daffodil. In 1985 he even claimed he was concerned him being gay would be seen as a publicity stunt, following the success of ‘gay acts’ such as Frankie Goes To Hollywood and Culture Club. Concerning his ethnicity, he was more silent, correct. Yet even this side of his story he never ‘hid’, as I shall show in a minute.

First of all: it’s strange to define ‘being open about something’ solely in terms of ‘talking about it publicly’. When looking at the lyrics and interviews of Mercury, it was not that hard to find some obvious, and some less obvious expressions of postcolonial identities —with a hybrid approach to culture—, a ‘gay sensibility’ —expressing an artistic sense of differentness— and even a full-blown ‘gay identity’. It’s interesting to see how Mercury fitted into the general transformations of sexuality and ethnicity as well as the pure musical trends.

Portraying a sense of postcolonial hybridity, that is being British at the same time as being ‘oriental’, is fairly obvious in songs like ‘My Fairy King’, ‘Ogre Battle’, ‘Seven Seas Of Rhye’ and of course: ‘Mustapha’. The lyrics clearly illustrate a mystic and exotic atmosphere, in the western perception all very ‘eastern’ things. In the era of the glam rock, Mercury could process his colonial background into the British style of music without raising too many eyebrows. This is exactly what hybridity means: expressing one’s roots and (postcolonial) cultural heritage while being one foot into another, in Mercury’s case the western phenomenon of rock music. In the most famous example, Mercury spiced up the western high-art tradition of opera with an element of exoticism: ‘Bismillah no!’. The hybridity goes even further if we think about examples as ‘Killer Queen’, which seems to give a definition of a Victorian woman, and ‘Seaside Rendezvous’, playing on the Victorian obsession with the sea.

Sexual identities are far more obvious in the work of Mercury. strangely, no one ever took the effort to analyse these against the background of the history of the gay community and sociocultural trends in general. The shift from a gay sensibility in lyrics such as ‘Killer Queen’ and (my personal favourite) ‘Good Old-Fashioned Lover Boy’, to a more erotic and hedonistic sense of self-perception in the lyrics ‘Don’t Stop Me Now’ or ‘Let Me Entertain You’, is interesting in the sense that is was around the mid-1970s that a fully organised ‘gay scene’ really emerged. This marked the development of a ‘gay lifestyle’ rather than the previous ‘sensibility’. The best examples may be especially ‘Body Language’, which according to Brian May is very difficult to see as not inspired by the gay scene. Presenting himself in full leather outfit, the sexual connotations were quite clear. Especially after the glory days of punk rock, which also had a thing for leather, the press certainly did take notice of this.  The innuendos, however, stopped in the mid-1980s. A new disease started taking proportions of an epidemic, which caused fear but sadly also brought a new low for acceptance of gays, also in music. Guns N’ Roses viewed immigrants and faggots as ‘spreading some disease’, and Skid Row wore a T-shirt that said ‘AIDS Kills Fags’. The irony is that it was up to Axl Rose to sing Bohemian Rhapsody during the Freddie Mercury Tribute concert in 1992, along with Elton John. Yes, he was singing in the honour of a gay immigrant.

With all this, it’s a bit unfair to call Mercury ‘ashamed’ or even ‘closeted’. His Persian background influenced his work and added the element of fantasy (or is this the real life?), and the presumption that people didn’t know he was gay is simply not true. He didn’t go public on his sexuality or background, but why do we expect this from minority groups? Discussing this with his former PA Peter Freestone, he had quite similar thoughts on this. He wondered why anyone should be ‘proud’ of race or sexuality, just because yours belongs to a minority. Mercury was proud of things he achieved, not things he was born with. Not much to discuss there if you ask me. One should note that he never denied it and certainly never played it down. The press simply did not pick up on it. One should also note that Mercury was not really “Indian”, he was Parsee, a community which has a long tradition of being very western, so the singer did not really denounce his background. Parsees identify as Parsee or Persian,  and hold the ideal of the ‘British Gentleman’. In a sense, it may be even more ‘treasury’ to his roots if he did become ‘more Indian’.

And then we come to the matter of ‘Mercury as a gay icon’ or ‘inspiration’. It’s not up to me to decide whether he is or should be one of them: I believe it’s up to the individual to decide over who to look up to. As a historian, I’m really not a fan of using events from the past as an example to anything: things simply change and much more often than not, thank God they do. One should consider the changed zeitgeist before taking the example of anything or anyone. Being not British and gay would be very hard to accept in the closed society of the 1960s and 70s (and even 80s). There simply was no room to discuss these things. Nowadays, we can be open about sexuality and race, a very nice thing no doubt. But calling Mercury ashamed because he did not ‘provoke’ the rock scene by issuing a press statement to come out of the closet is what happens when you analyse his situation from our 21st-century perspective. He only acted the way he did because he, as all of us are, was a child of his time.

I do want to stress this: too little credit also goes to the rest of the band. Queen provided an extremely open environment for Mercury to be true to himself. Whether he was out in public or not, he was out in the band. If three ‘macho men’ from the hard-masculine rock world refuse to make a point of homosexuality in the narrow-minded British society of the 1970s and 1980s, why should you in 2018? Shortly after Mercury’s passing in 1991, Taylor and May even stuck up to their friend, stressing he did have a meaningful relationship. A bold move considering the violent atmosphere hanging around the virus, homosexuality and the homophobia in the rock scene which took new heights by the beginning of the 1990s. If this isn’t adorable according to you, I don’t think you hold the right definition of this word.

So yes, Mercury did shatter stereotypes and rigid conventions. He held his pen and coloured outside the lines, far enough to make them nothing more than silly side notes, yet never far enough to ridicule the glue that was holding it all together: him being a rock singer. I personally would say he was an example for his time on some levels: by never making a big thing about ethnicity and sexuality but always playing out (hybrid or playful) identities, he never hid it. In other words, he showed how meaningless these labels are. The fact that Donald Trump played his music indeed shows how idiotic prejudices against homosexuality and race are: as long as they serve you, it’s apparently ok.

Ethnic and sexual identities are far more complex than the black or white ‘proud vs. ashamed’ narrative and they’re not to be justified by anyone else than the person holding them. Perhaps Mercury was and is an example for migrants or non-heterosexuals, but as I said this is up to the individual. Whatever you think of Mercury, he is the most diverse, unprobeable and therefore most interesting artist ever.

What matters is he is an absolute inspiration through his music: he overcame the obstacles in himself to become the larger than life rock god we simultaneously vacuum and headbang to today. Isn’t that just lovely, dear?