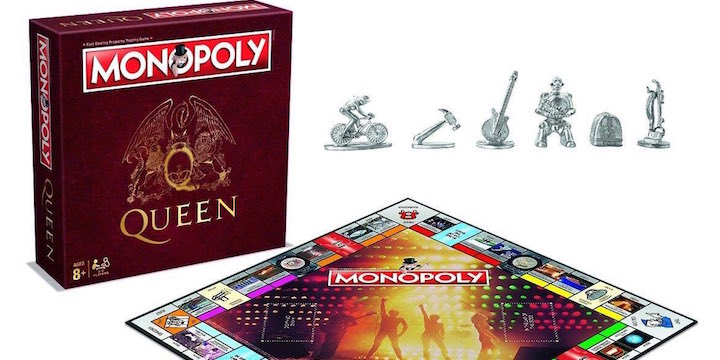 MONOPOLY: Queen Edition follows in the footsteps of Freddie, Brian, Roger and John from their humble beginnings on London’s smaller stages to worldwide success and adoration.

Produced with the full collaboration of the band, the MONOPOLY: Queen Edition game features six collectible Queen tokens inspired by their iconic career and bespoke ‘houses’ and ‘hotels’ designed by the band’s Brian May. The game board features gig venues from throughout Queen’s illustrious history- from the band’s formation in 1970, right up to the 1986 Wembley and Knebworth shows – Freddie’s last appearances, thanks to Roger Taylor’s encyclopaedic memory of their live experiences.

Immerse yourself in Queen’s world, buy these famous venues and charge admission. Collect the colour sets and begin building staging blocks so you can charge higher prices. Upgrade to the full Queen production when you have four staging blocks and charge maximum admission.

Take your chances with ‘A Kind of Magic’ and ‘In the Lap of the Gods’ cards, which can boost your career or land you in trouble. As you play, you’ll experience life as a member of a world-class rock band within the unique MONOPOLY game setting.

From overseeing the development of the game Brian May, Queen’s guitarist and founding member said “I think fans will be enchanted by the depth of detail in this special Queen edition of an already well-loved game. We have subtly morphed the traditional property-developing journey of Monopoly into the real-life adventure of a rock band on the road. Players will plot a whole career, based on developing bigger and better shows in venues all around the globe. Join us and conquer the World !!!”

In making the announcement, David Boyne, MD of Bravado UK, said, “We are delighted to have partnered with Winning Moves to help bring these historic music and gaming forces together to create MONOPOLY; Queen Edition. It has been inspiring to see the band so involved throughout the creative process and Brian and Roger’s input has helped create a truly special and personal version of the iconic game that Queen Fans around the world will love.”

Like Queen to the world of rock, MONOPOLY is iconic in the world of games, having been enjoyed by more than a billion players worldwide since it launched. It has been published in more than 47 languages and sold in over 114 countries and is a registered trademark of Hasbro, Inc.