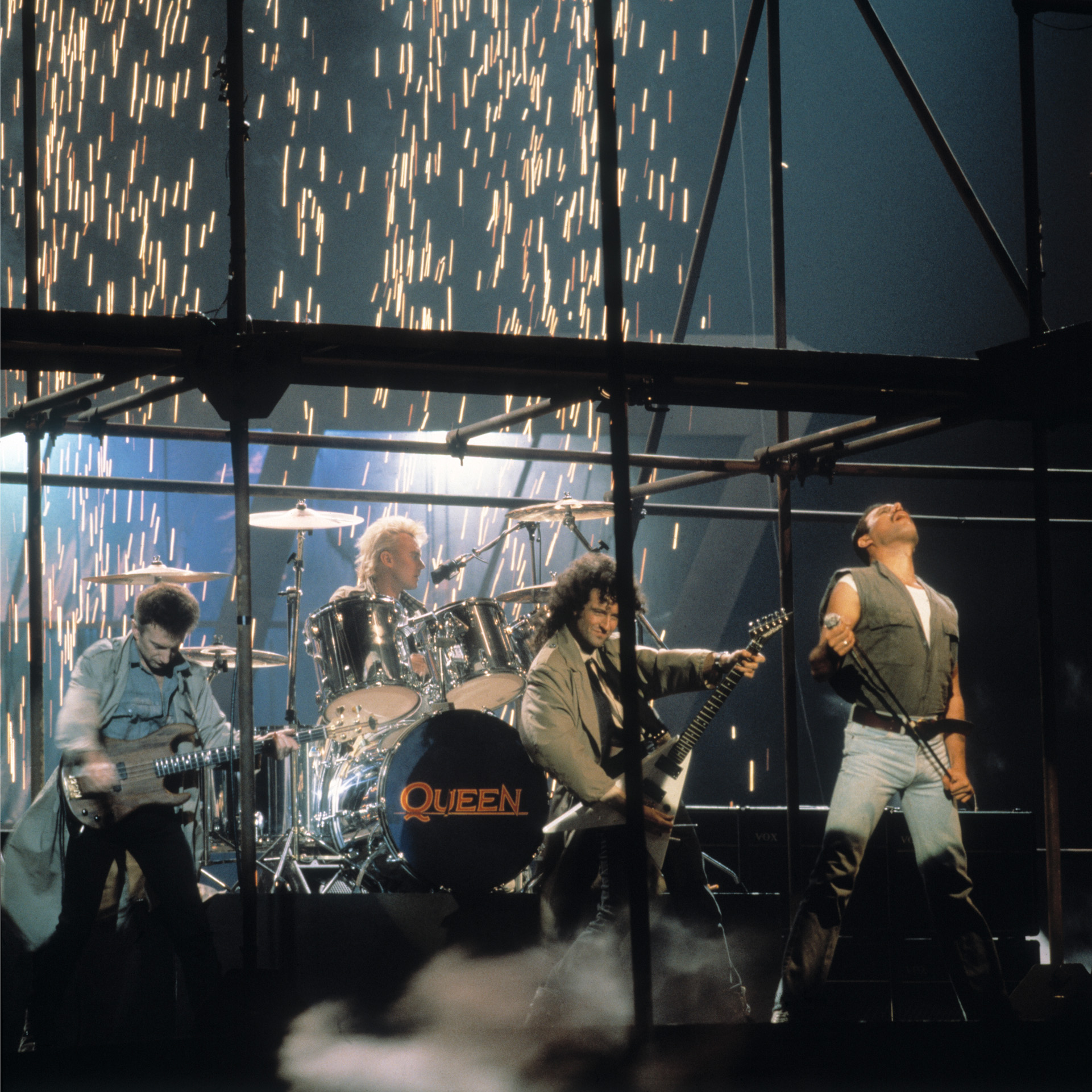 Queen On The Widescreen - Fan Feature By Jane Remedio

Queen has been approached numerous times to provide the soundtrack to films over the years. At its heart the role of music in a film is to engage the moviegoer, to instil emotion, happiness, fear, and triumph. Music in film sets the tone of the entire movie, agreeing to compose the soundtrack is not a decision to be taken lightly. Queen has agreed to provide music from individual songs, to a full-blown orchestral score for four films in their career, each film unique in their own way, but a perfect fit for the Queen sound.

Queen were approached by De Laurentiss to score the film in late 1979. After seeing twenty minutes of the film Queen agreed to provide the soundtrack for the entire movie. Queen approached it as an opportunity to create the first heavy metal movie score with rock-based orchestral compositions. At the time it was ground-breaking for a rock group to be given the artistic freedom to do what they wanted as long as it complimented the film.

Work on ‘Flash Gordon – The Original Soundtrack’ began concurrently with the final studio sessions of ‘The Game’ during February to May 1980. Given the tight timeline, the soundtrack needed to be completed by December of that year, the recording sessions were fitted in between the US Tour to promote ‘The Game’.  In order to maximise their time Freddie Mercury, Brian May, Roger Taylor, and John Deacon worked on their songs for the soundtrack independently. At least four recording studios, Musicland in Munich, and the Town House, Advision, and Anvil Studios in London were used.

To establish the genre and to give atmosphere to the story Roger Taylor explains “We approached it as a comic book movie score”. He further explains their overall vision for the project "We wanted to write the first rock 'n' roll soundtrack to a non-music film. At the time, rock 'n' roll was not used in movies unless they were specifically about music."

‘Flash Gordon – The Original Soundtrack’ became a true cross-over score, it was Queen’s idea that the dialogue and sound effects from the film appear on the soundtrack. Brian May explains "We wanted a soundtrack album that made you feel like you'd watched the film so we shipped in all the dialogue and effects and wove it together like tapestry." The use of the dialogue from the film in the song ‘Flash’ was so successful that to this day Brian Blessed, who played Prince Vultan in the film is asked to say “Gordon’s Alive!” by fans all over the world.

Queen believed in their work on the ‘Flash Gordon’ soundtrack so they released it as a true Queen album instead of a tie-in companion piece to the film. Upon its release, the film performed well in the UK and parts of Europe but was a box-office flop in other regions. Today the film and the soundtrack are considered cult classics.

Directed by Fritz Lang, Metropolis was a silent film originally released in 1927.

Although the film has futurist sci-fi connotations Fritz Lang and his wife, Thea von Harbou who wrote the novel on which the film was based, were inspired to create the story of a sprawling metropolis during their first visit to New York in 1924.

Giorgio Moroder gained the rights to the film in the early 1980’s and after a three-year restoration process, he approached Freddie Mercury and Queen to write a song for the film. As long-time fans of the film, Queen agreed to write some music for it as long as they could have the rights to use some of the film footage, which they later purchased from the German government who owned the copyright of the film.

Queen embraced the film and its warning of a dystopian world ruled by the plutocracy. The cautionary tale of the dangers of a mechanised world and the feeling of despondency of the oppressed workers struck a chord with the band, so they used the iconography of the film intertwined with the film footage that they had purchased to create the ‘Radio Ga Ga’ video clip. Upon its release, the video clip for ‘Radio Ga Ga’ was misinterpreted by the uptight pundits of the day as having Nazi connotations, in particular, the now famous double handclap sequence featured in the chorus of the song.  Roger Taylor explains "That section was meant to sort of portray the mind control of the workers in the movie". Upon watching the film, the evidence is clear that the warnings of a totalitarian world contained in the clip mirrors the overarching theme of the film.

The Freddie Mercury track ‘Love Kills’ appears in the film albeit a cut-down version. The full version of the song that appears on the official soundtrack almost definitely features Brian May’s guitar and Roger Taylor’s programmed drums. ‘Love Kills’ appeared on the Official Metropolis film soundtrack along with songs by Pat Benatar, Bonnie Tyler, Billy Squier, and Adam Ant.

Queen were approached early 1983 to compose the entire soundtrack for the film adaptation of John Irving’s novel Hotel New Hampshire. John Deacon explains the depth of their involvement at the time "Freddie and I went to Montreal to meet Tony Richardson, who's making a film called Hotel New Hampshire. Freddie is writing at the moment and we may do some recording for it later this year".

During the course of the year, the producers of the film changed their minds in favour of a classical movie score. Freddie Mercury had composed the bare bones of the song ‘Keep Passing the Open Windows’ which is a catchcry from the movie symbolising perseverance and hope. Freddie liked the idea of the song so he changed it and adapted it so it could appear on Queen’s 1984 album ‘The Works’.

During the recording sessions for ‘A Kind of Magic’ Queen were approached by Russell Mulcahy to compose the theme song for Highlander. They initially declined, but finally agreed to see snippets and scripts from the film. Russell Mulcahy explains “Queen had done a great score for Flash Gordon, so we gave them a 20-minute reel of different scenes and they went: “Wow!” We’d only expected them to do one song, but they wanted to write one each”. ‘Princes of the Universe’, ‘Gimme the Prize (Kurgan's Theme)’ ‘One Year of Love’, ‘Don't Lose Your Head’, ‘Who Wants to Live Forever’, ‘A Kind of Magic’ and a recording of the ‘Theme from New York, New York’ feature in Highlander.

Queen composed the music for the film first which required different orchestral arrangements. ‘A Kind of Magic’ is not considered an official soundtrack for Highlander. John Deacon explains “when we came to do the album we actually rearranged a lot of the tracks, made them longer and wrote more lyrics and tried to make them into fully fledged songs so they stand up in their own right”. There are additional tracks on the ‘A Kind of Magic’ album that do not appear in the movie. Freddie Mercury explained “To start off with it was a Queen project as such anyway, but we did only like five tracks to go in the film and then there are about nine tracks now, is it nine, yes about nine tracks, so there are additional tracks which are not in the film, so it is a new Queen album anyway”.

The integration of the films dialogue and sound effects, a technique Queen utilised in the’ Flash Gordon’ Soundtrack is used in the song ‘Gimme the Prize (Kurgan's Theme)’. Never ones to remain stagnant Queen decided to push those boundaries in the ‘Princes of the Universe’ video clip by intertwining footage of the film and having Christopher Lambert, who plays the main protagonist in the film, stroll onto the stage with the band in full flight to clash with Freddie Mercury.

Like Flash Gordon, Highlander is considered to be one of the cult classics of the 1980’s.

Queen have always approached their music with a keen sense of visuals, from live shows to video clips there has always been a widescreen, cinemascope feeling to Queen’s music.

Freddie Mercury gives insight into the entertainment side of Queen: “I like people to go away from a Queen show feeling fully entertained, having a good time. I think Queen songs are pure escapism, like going to see a good film – after that, they can go away and say that was great, and go back to their problems”.

Bohemian Rhapsody the movie whilst being a journey of “pure escapism” will give us all in-depth insight and an added layer of visualisation into how the music was created, from Galileo’s and foot stomps, intricate orchestrations and overdubs to a voice that is enduring, timeless, a voice that changed the world. At its very heart Bohemian Rhapsody, the movie focusses on Freddie’s story, but it also shines a spotlight on four men, a band of brothers, who became legends.