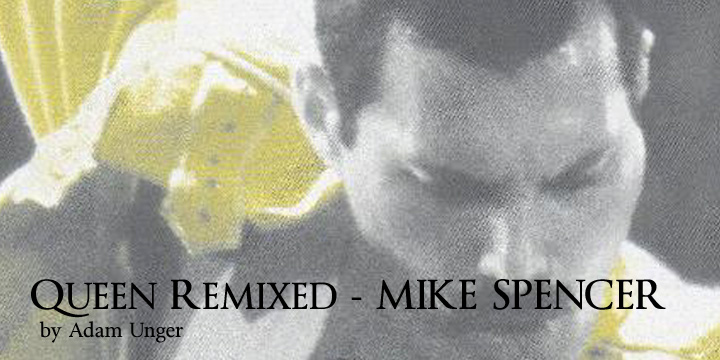 This article is the second part in Adam Unger’s ‘Queen Remixed’ series. For part one with John Luongo, please click here.

Article based on Mike Spencer interview by Adam Unger - April 2012

Although they were not an active band for most of the 1990s, Queen continued to have chart success and a growing following. On the heels of the Freddie Mercury Tribute Concert, Queen’s live performance of “Somebody To Love” with George Michael earned them another number 1 hit. 1995 saw Made In Heaven, their last proper studio LP, become their most successful album ever, reaching number one in the UK and going 5x platinum. The album produced five Top 20 hits, including “Heaven For Everyone,” which peaked at number 2. In 1998, “No-One But You (Only The Good Die Young)” continued their momentum, reaching number 13 in the UK charts.

By the end of the decade, Queen were preparing their latest Christmas release. Greatest Hits III was a natural continuation of Queen’s hits collections. To fill out the album, some solo hits and a few “Queen +” collaboration singles were included. A new remix for “Under Pressure” was commissioned for inclusion, as well. One of the producers commissioned to rework the track was Mike Spencer.

Mike Spencer is a music producer and remixer from London, England. He is best known from his work with artists such as Rudimental,  Emeli sande  and Jamiroquai. His productions have achieved numerous multi-platinum sales awards, MOBO and Brit award wins, as well as Mercury Prize nominations.

About his “Under Pressure” Mix, Mike recalls, “I was commissioned for the remix because of my relationship with Parlophone Records at the time; I was doing various things for them. I'm guessing that other remixes would have also been commissioned as well, but happily mine was chosen for that release. I found the whole experience truly amazing.”

Mike explains there were no boundaries or limitations in the direction of the mix. “There were no real guidelines, I was to do what I felt was right for the record. As it happens, since I was fan of the original recording anyway, I wanted to stay fairly faithful to its original sonic and its overall intentions. I simply tried to tune-in to what I believed the record would have sounded like had the band had access to the technology that I had available to me.”

“Getting a hold of the original master tapes for Under Pressure and sifting through the various performances was fantastic, as was identifying various parts that hadn't made the final cut of the original record. Somewhere in my archive I have a copy of the original multitrack which I'd quite like to check out again, but if my memory serves me, I seem to remember that somewhere on an unused track are versions of takes with Freddie and David singing some of their alternate parts.”What many fans don’t know was that Mike had a very special guest one day in the studio.  “John Deacon made a couple of visits to the studio during the process.  He was great and really loved the treatment. I thought John was great, such a lovely bloke and really engaged with the mix and me.”

A few options presented themselves for the “Under Pressure” remix. Ultimately, an in-house mix by Joshua J. Macrae and Justin Shirley-Smith (with input from Queen) was chosen to be included on the album and be featured as its main single. “Brian did the ‘Rah Mix.’ I'm not certain why the ‘Rah Mix’ was chosen as the lead, but Parlophone were expecting to use my one as the main version; this is why it isn't too 're-mixy' for want of a better term. We all expected a number one but at the last moment there was a switch to the ‘Rah Mix’ - why, we may never know.  Had it been, I do believe we'd have had a number one for the millennium.  Nevertheless, I remain proud of the record and very proud of my connection to the band. I'm really pleased that it is of some relevance and has had a subsequent release.”

Since its initial CD single appearance, the “Under Pressure (Mike Spencer Mix)” was reissued on The Singles Collection 4 Box Set.

Special Thanks To:- Mike Spencer for his time and energy, Patrick Lemieux and Suzy Unger

Adam Unger is the co-author of The Queen Chronology book, available at Amazon, Barnes&Noble.com and Lulu.com. He is owner and webmaster of QueenVault.com and has contributed articles to QueenOnline.com, including Queen Remixed – John Luongo,  B-Sides and The Elektra Edits.