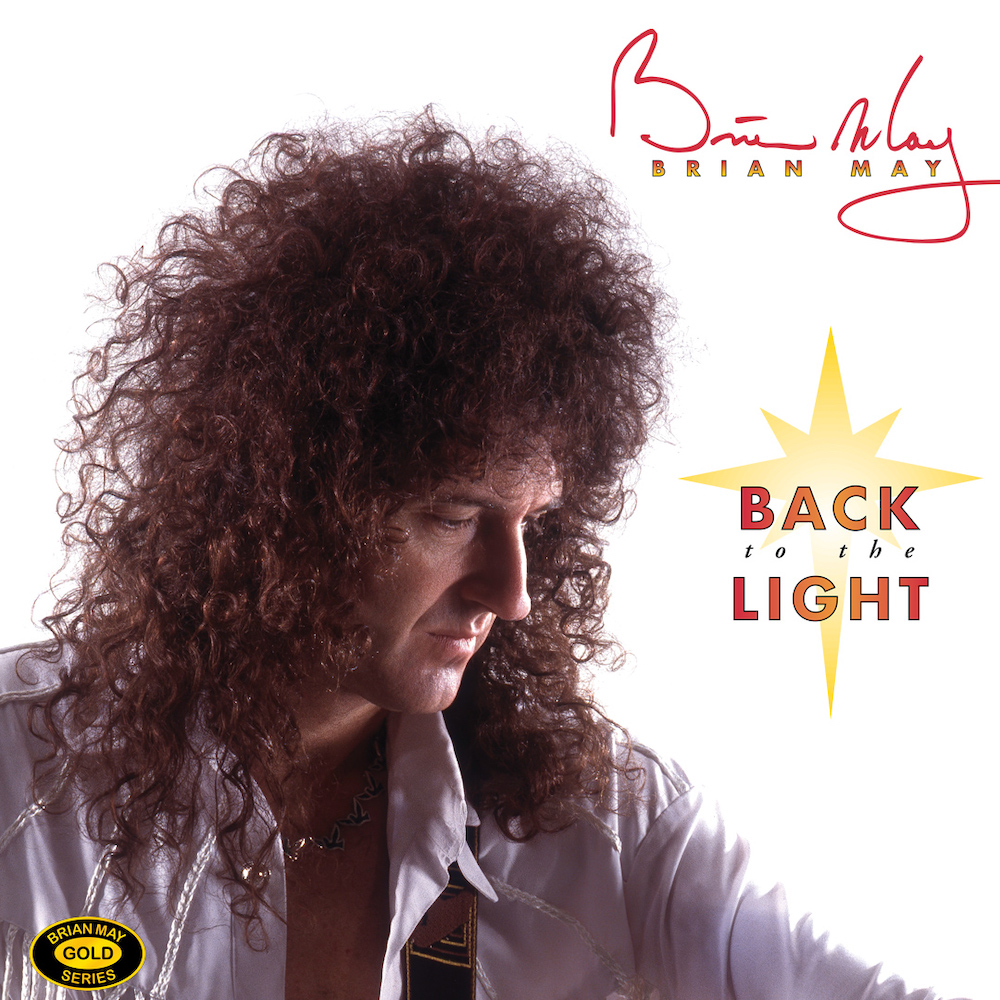 'Back To The Light' Reissue - Pre-Order Now Available

Brian May Back to the Light Shines On With Remastered Reissue

“Anybody fancy a season of BM re-releases with lots of juicy extras?” asked Brian May through his Instagram feed in 2020. “We’re working on a plan!!!” The first stage of that plan comes to fruition now, with the long-awaited reissue of the legendary Queen guitarist’s superlative debut solo album. Almost 30 years on from its initial release, Back to the Light stands as an intimate and expansive testament to the talent and tenacity of one of the foremost guitarists and songwriters of his generation.

On its release in September 1992, Back to the Light was an unqualified hit. Hitting No 6 in the UK album charts, it produced a brace of indelible singles. Introduced to Queen fans during an emotive performance at The Freddie Mercury Tribute Concert, Wembley Stadium, in April 1992, ‘Too Much Love Will Kill You’ reached No 5 in the UK. ‘Driven by You’ had already peaked at No 6. The anthemic ‘Back to the Light’ and rollicking ‘Resurrection’ also charted, while the instrumental ‘Last Horizon’ would become a staple of both The Brian May Band’s solo concerts and May’s later live return to Queen.

Sometimes rocking, sometimes reflective, the singles give a sense of the album’s depth and reach. ‘The Dark’ reconfigures Queen’s ‘We Will Rock You’ to introspective ends and builds to a symphonic crescendo before the full-blooded title track sets out May’s stall between its multi-tracked voices, euphoric chorus and crunchy guitars. ‘Love Token’ is one of Brian’s ‘momma and poppa’ songs, a tale of a break-up plotted over blues-rock backing. Co-credited to drummer Cozy Powell and featuring revered rock musician Don Airey on keyboards, ‘Resurrection’ is a glittering high energy rocker, with probably as many operatic overdubs as ‘Bohemian Rhapsody’. Featuring a tour de force from May on guitar and cataclysmic drum pyrotechnics from Powell, for many this is the outstanding track of the album. Lyrically, it is mounted on personal foundations, troubled at the heart but determined to find hope in “the promise of the future”.

‘Too Much Love Will Kill You’ is a scorching confessional, which Brian cites as possibly the most important recording of his life. It earned a coveted Ivor Novello Award (Best Song Musically and Lyrically) and reappeared later in a different incarnation as a Queen track.  ‘Driven by You’ is a harmonious HIT rocker with a rousing chorus, the result of Brian accepting a challenge to create a track for a Ford Motor car TV ad. Band-mate Freddie complimented Brian on this vocal delivery!  The heart-breaking ‘Nothin’ but Blue’ is co-credited to Cozy Powell and is the sister track to ‘Somewhere In Time’ from his The Drums Are Back album. The song was written by Brian the night before Freddie Mercury passed away. Queen’s John Deacon makes a rare guest appearance on bass.

The roistering ‘I’m Scared’ wears Brian’s fears on its sleeve, while ‘Last Horizon’ reaches for a sense of serenity in its expressive guitar work. Written for skiffle star Lonnie Donegan, ‘Let Your Heart Rule Your Head’ proves Brian’s easy way with buoyant melody. ‘Just One Life’ is a poignant elegy to a lost loved one, but very unusual in that Brian wrote the song about someone he never met – only came to know at a celebration of his life.

Finally, a joyful cover – the only one on the album - of the Small Faces’ ‘Rollin’ Over’ realigns Brian with some of his early rock roots.

Throughout, the many flavours of Back to the Light remind us how vital Brian’s writing was to Queen. Besides his unmistakable guitar work, his songwriting credits include ballads (‘Save Me’), multi-part epics (‘The Prophet’s Song’), movie themes (‘Flash’s Theme’), bluesy workouts (‘Sleeping on the Sidewalk’), and numerous full-bore rockers – including, of course, stomping live tentpole ‘We Will Rock You’.

Written during a period of immense personal upheaval between 1988 and 1992, Back to the Light finds Brian assuming the spotlight with cathartic honesty and artistry. It followed the losses of his father and Queen frontman Freddie Mercury, and the temporary cessation of the band’s activities. It also followed May’s separation from his first wife in 1988 and relationship with Anita Dobson, which made him the unwilling recipient of tabloid attention. In interviews, he talked about the struggles he experienced as a result of these life changes, describing the album as a kind of therapy.

Long unavailable on CD, vinyl, digital download and streaming services, the reissue arrives with audio supervision from Justin Shirley-Smith and Kris Fredriksson. On the original release’s liner notes, Shirley-Smith received an affectionate namecheck for, writes Brian, “dealing with my erratic recording habits” in his role as co-producer and engineer. “Brian is a perfectionist and he won’t leave something until he’s happy,” says Shirley-Smith, whose work for Queen stretches back to 1984.

Sound engineer Fredriksson wanted to see that perfectionism reflected in the reissue. “If it hasn’t been available and we’re going to reissue it,” he notes, “we thought why not get it remastered by the best mastering engineer in the world?”. Enter Grammy-winner Bob Ludwig, who worked from the original restored flat mixes to ensure this new edition of Back To The Light sounds better than ever.

Meanwhile, Fredriksson cast the net wide to source bonus tracks for a second disc, Out of the Light. Brian’s Red Special speaks on haunting instrumental versions of ‘Nothin’ but Blue’, ‘Too Much Love Will Kill You’ and ‘Just One Life’. ‘Driven by You Two’, the Ford advert version of ‘Driven by You’ and ‘Driven by You’ (Cozy and Neil Version ’93) also feature alongside some live cuts. ‘’39/Let Your Heart Rule Your Head’, ‘Last Horizon’ and ‘We Will Rock You’ were recorded at a triumphant Brixton Academy show on 15 June 1993, documented on the Live at the Brixton Academy album and film, where The Brian May Band featured Powell (drums), Spike Edney (keyboards), Jamie Moses (guitar), Neil Murray (bass) and, on backing vocals, Catherine Porter and Shelley Preston. The live version of ‘Too Much Love Will Kill You’ was recorded at the Palace Theater, Los Angeles, on 6 April 1993; the night before, Brian and a special guest tore through Queen concert favourite ‘Tie Your Mother Down’ on The Tonight Show with Jay Leno. “Welcome, Mr Slash,” says Brian, as the Guns N’ Roses guitarist serves notice of May’s multi-generational influence.

To mark the occasion of the reissue, Back to the Light will be available in a Collector’s Edition box set featuring an exclusive white-vinyl LP, two CDs, a 32-page book, a 12” art print, a download card and an enamel badge all presented in a lift-lid box. A limited-edition (x1,000) of the same box-set is available exclusively on Queen Online Store with a signed 12” art print.

On all fronts, Back to the Light stands tall as an album of heart and resilience, uplift and sensitivity. “In my mind, this album was always called Back to the Light,” wrote Brian on the original sleeve notes. “At its beginning, I felt no real hope of finding the light; now it glimmers dimly, encouragingly, but always intermittently in the hall of mirrors around me.”

Almost three decades on, Brian’s new sleeve notes include a tribute to the late, great Cozy Powell, along with a reflection on the search the album documents. “In 2021, proudly and fondly presenting this work to a new audience,” writes Brian, “and noting carefully my original liner notes, I can report that I am still on the quest of finding answers to most of the questions posed in this suite of songs, and to this day, the Light still glimmers darkly, tantalisingly, always a little out of reach. Music gets us through.” Lit up with emotional honesty, big tunes, rock’n’roll vim and world-class guitar work, Back to the Light shines on.

“This is part of a series. The Brian May Gold Series. Each of them will have a little gold stamp on. And each one of them will give me the opportunity to rediscover the road that I travelled. I really found this fascinating. I was a little nervous at the beginning, thinking what is this going to dredge up in me? But I loved getting back in there. I’m really just hoping it will connect with people who have never heard this stuff before. They know me as guitarist for Queen. Some know me as an astronomer. Some know me as a campaigner for animal rights. I’m a sort of evangelist for 3-D Victorian Stereoscopy. But very few people have heard my solo output. So I’m excited to see how this turns out. I found it fascinating going back in there and rediscovering why I wrote certain things. What they meant to me. How we recorded. Some of it is so massive in the recording I can hardly believe we pulled it off - it’s very epic, some of it. And I like that. And at the same time, there’s little corners of it which are very simple, very understated, very emotionally naked. I discovered so much of what I’m saying in the album I still feel. I still feel those dangers, those fears, those hopes, those dreams.”

BACK TO THE LIGHT

5. Too Much Love Will Kill You (May, Musker, Lamers)

Produced by Brian May.

Co-produced and engineered by Justin Shirley-Smith.

All vocals, backing vocals, guitars, keyboards and anything else around – by Brian May unless otherwise stated.

OUT OF THE LIGHT

2. Too Much Love Will Kill You – Guitar Version (May, Musker, Lamers)

6. Tie Your Mother Down (Featuring Slash) (May) Live on the Tonight Show with Jay Leno, 5th April 1993

The Live tracks are played by The Brian May Band from the ‘Back To The Light’ Tour 1993.

“And a special thank you to Slash”.