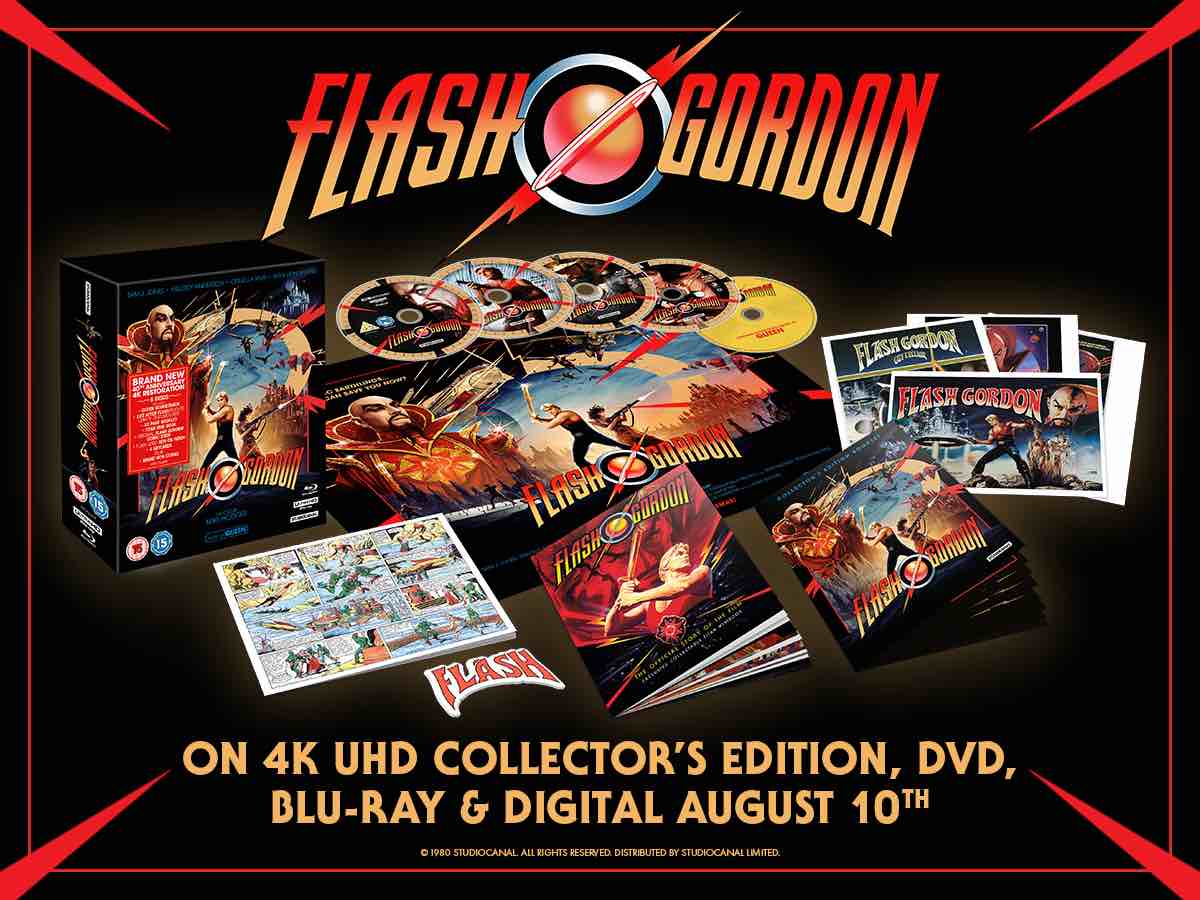 “Like a fairy tale set in a discotheque in the clouds.” Pauline Kael, The New Yorker

STUDIOCANAL is excited to announce the new 4k, Ultra High Definition restoration of Mike Hodge’s cult classic FLASH GORDON (1980), in honour of the film’s 40th anniversary. The film is now confirmed to be in select cinemas from July 31st, it will then be released on 4K UHD Collector’s edition, Blu-ray, Steelbook, DVD, and digital on August 10th. In addition, the film will screen as part of The Luna Drive-In Cinema from August, with screening details available on their website as they are announced. FLASH GORDON will also be distributed by STUDIOCANAL in France, Germany, Australia, and New Zealand this Summer.

For the new 40th Anniversary 4k restoration, Flash Gordon was scanned from the original 35mm negative to produce 4K files. Over 500 hours of manual restoration repaired serious damage that included image instability, scratches, and intermittent flicker. The sound was scanned from the original track negative and underwent restoration to improve issues ranging from audio drop-outs throughout the feature and during reel changes, digital clicks and optical distortion. The film was colour graded for theatrical, home entertainment and 4K HDR release, using previous digital releases and 35mm prints as a reference. In line with the Director’s vision and the original 35mm cinema release, VFX work was applied to remove the strings in all scenes where visible. This restoration was approved by Director Mike Hodges in May 2020 and will include the first 4K HDR Dolby Vision master of Flash Gordon.

“I’m very grateful to STUDIOCANAL for this brilliant 4k restoration. The restoration captures perfectly the vivid colours of the sets, skies and costumes. It also corrects some of the problems encountered with the special effects system we used. With Chroma key compositing we could insert skies, rocket ships, hawk-men, pretty well whatever we wanted, into the blue backing built into the studio sets. The problems came later when we had to eliminate, for example, the wires used on the hawk-men. We were eventually successful but even then some 35mm prints were variable and the wires would be back again. With this new restoration, that problem is thankfully laid to rest. Of course Chroma key is primitive by the side of the current process, CGI (Computer Generated Imaging). That said I’m pleased we stuck with the old fashioned system. CGI would have been too slick. After all, Flash Gordon was a cartoon strip from the 1930s brought back to life on celluloid some five decades later.” Mike Hodges, April 2020

Approached by legendary producer Dino De Laurentis to provide the score for his 1980 screen adaptation of iconic comic strip character Flash Gordon, Queen set aside all the norms of film music soundtracks. Their vision of the commission was to incorporate on-screen dialogue and effects with their own musical compositions. Written, performed, and arranged by the band with orchestral arrangements by Howard Blake, audio from the film is featured prominently including the now unmistakable voice of Brian Blessed and other cast members including Max Von Sydow, Melody Anderson, Timothy Dalton and Topol. Seamlessly incorporating these alongside Queen rock guitars and progressive electronica the final Flash Gordon soundtrack consisted of 18 tracks written by all the band members. Brian May’s ‘Flash’s Theme’ released under the title ‘Flash’ as the only single from the soundtrack and unusually featuring Freddie Mercury and Brian May sharing vocals have become one of the most instantly recognised tracks of all time. Queen’s boldly-executed score reaped rewards such as gold discs, BAFTA recognition, and Ivor Novello nominations on release in December 1980. But perhaps its crowning glory is that it still sounds futuristic 40 years later.

Realising that he alone cannot stop these sinister attacks he forces football hero Flash Gordon (SAM J. JONES) and New York travel-agent Dale Arden (MELODY ANDERSON) aboard his makeshift rocket ship at gunpoint. Their destination – the mysterious Planet Mongo. On this strange new world, all life cowers under the cruel reign of Ming The Merciless (MAX VON SYDOW), an intergalactic tyrant who demands absolute loyalty under pain of death. Aided by his menacing, golden-masked hench-thing Klytus (PETER WYNGARDE) he holds the fates of whole peoples in his icy grip, and Earth is but his latest plaything.