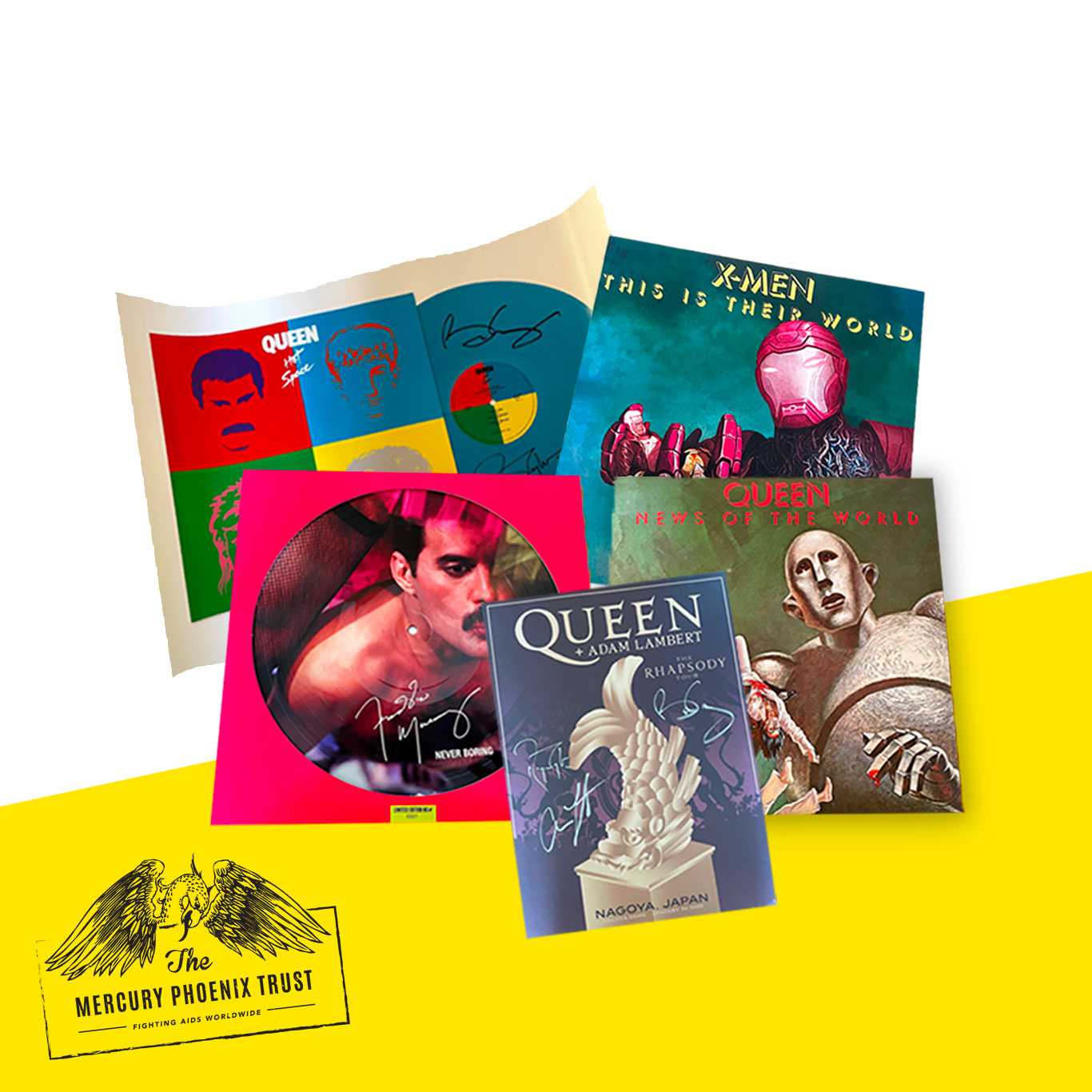 The annual Mercury Phoenix Trust online Givergy auction has now closed and it raised an incredible £10,633!

The Mercury Phoenix Trust gave fans the opportunity to bid on some truly unique items from the band, and help raise funds in Freddie’s name in the worldwide fight against HIV/AIDS, and did you guys deliver!

This year saw a collection of items feature several 'Number 1' limited edition vinyl pieces go under the hammer, including the much sought after 'News of the World’ album sleeve that was created exclusively for Marvel in conjunction with Comicon in 2017. Also available is a very special ‘one-off’ piece of Hot Space album artwork signed by Brian and Roger. Full details are below on all auction pieces.

The auction ran from Saturday 14th August to September 4th at 11.59pm (BST) and is now over

Click here to check out the following auctions items and what they went for.

Thank you once again for your generoisty.

NAGOYA SIGNED POSTER - Signed by Brian, Roger, and Adam whilst on tour in Nagoya, Japan in 2020, this limited edition poster is numbered 1 of 600.

ROGER TAYLOR – FUN ON EARTH PICTURE DISC - With the release of Roger's brand new album 'Outsider' due later this year, what a perfect time to get your hands on this signed Fun on Earth picture disc. 180 gram heavyweight vinyl in protective sleeve.

FREDDIE MERCURY – NEVER BORING PICTURE DISC - This beautiful picture disc is something the Mercury Phoenix Trust is proud to donate to this auction. Numbered 1 of 2019.

QUEEN – JAZZ PICTURE DISC - Donated by the Mercury Phoenix Trust this limited and numbered album is a gift that has been waiting to get into someone's collection. This is Number 1 of 1978.

QUEEN – NEWS OF THE WORLD COMICON EXCLUSIVE VINYL - This News of the World edition was created exclusively for Marvel in conjunction with Comicon in 2017. It includes a bonus art print and is Number 1 of 220 copies.

QUEEN HOT SPACE SIGNED ARTWORK - This one-off, ie THERE IS NOT ANOTHER artwork run out, was created when the band was putting together their Studio Collection Box Set. This was created for them to approve the artwork that would be included in the box and we grabbed a chance to get them to sign this for one lucky collector. This is signed by Brian May and Roger Taylor and is in immaculate condition.

NEAL PRESTON SIGNED PHOTOGRAPH BOOK - This is signed by Neal Preston and contains a beautiful print inside the cover of the book - this is the item that is signed. This is, without doubt, a most wonderful collection of Queen’s musical adventures out on the road, captured by Neal himself.