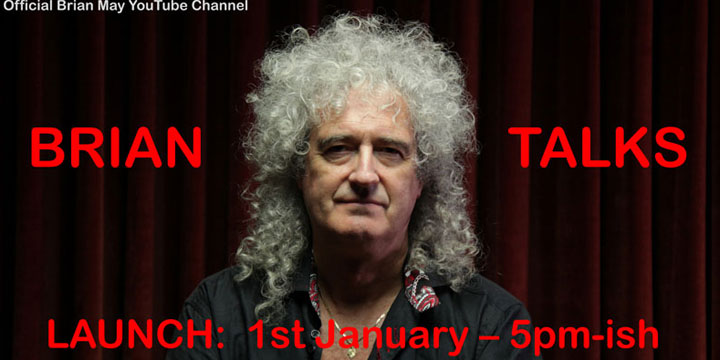 "Well, I’ve been teasing my new BM channel on Twitter and here on the Soapbox, so now it’s time to spill the beans."

"The BRIAN MAY CHANNEL is designed to carry anything on film or vid that relates to me outside Queen - to replace all the bits and pieces of music video that are currently around out there with new highest quality versions, and fill in the gaps; and to cover under one umbrella the other areas that I operate in … Stereoscopy, Astronomy (eventually!), and Animal Welfare and Rights issues. Each of these areas will have their own section on the Brian May Channel. But the intended pivot of it all is the entirely new part that we’re calling Brian Talks. This section will carry current ‘to the camera’ comments, updates and communications, and I’m hoping it will be a proper ‘voice’ for me, an outlet, as well as a way of glueing together the rest of the channel."

The Official Brian May You Tube Channel - www.youtube.com/brianmay

It's the video sister of the text-based Soapbox – the two will link directly. Subjects will include Astronomy, Stereoscopy, Music, Animal matters, and wider concerns relating to the way Britain is run !

Eventually to carry all the Brian May solo videos in HD that we can muster - remastered direct from original sources - basically everything other than Queen projects.

It will be organised into playlists such as Star Fleet, Back to the Light, collaborations with Kerry Ellis, guest appearances … etc.

There will be links in the descriptive text to iTunes for those vids that can be purchased.

Will contain updates specifically on stereoscopy and developments in the London Stereoscopic Company, the Diableries film - One Night in Hell - and related projects. Directly related to the LondonStereo.com website.

Will contain all animal welfare and rights related footage, and matters relating to our work in Parliament as well as in the public arena. This section will directly relate to the Save-Me.org.uk website.

Apparently this section is obligatory ! But for us it will be useful, since it will be possible to check up quickly on what’s active and in process, as the site grows.