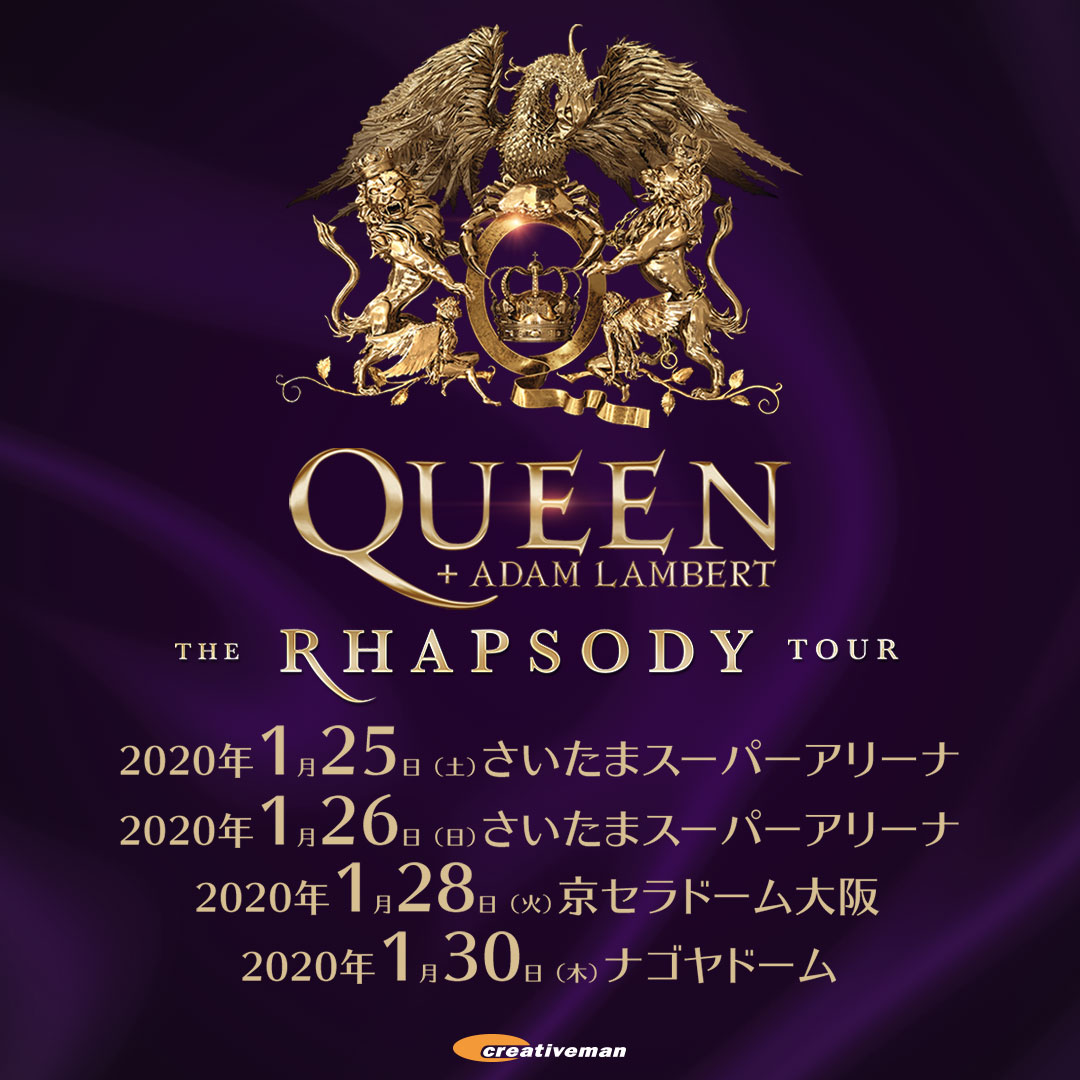 Queen + Adam Lambert will be Heading to Japan in January 2020!

April 17th is Queen’s Day in Japan.  On April 17th 1975, Queen landed in Haneda airport with more than 3,000 fans greeting and welcoming the band, the band’s first ever visit to Japan.

Queen original band members Brian May and Roger Taylor are teaming up once more with longtime frontman Adam Lambert on lead vocals and returning to Japan in January 2020 with a brand-new, spectacular production.  Japan, where Queen created ‘Queen Mania’ when they first arrived in 1975 and remains a special place for the band even today, will get to experience the band’s all-new concert experience with the coming of the Rhapsody Tour

Ticket details will be announced on Creativeman’s website on 26th April - www.creativeman.co.jp

Announcing their Rhapsody Tour of Japan Roger Taylor said: "Japan has always been such a special place for Queen and we can't wait to return with our new show."

Adam Lambert said:  “It feels like too long since we were last in Japan, but I have such fond memories of our time there, and I am so thrilled to go again with a whole new show.”

Says Brian May: “The fond relationship between Queen and the Japanese people is legendary. Over the years the bond has strengthened, and in recent months the success of the Bohemian Rhapsody film in Japan has become an unprecedented phenomenon.  It will be the greatest thrill for us to return in January to the country that first recognised Queen music nearly 50 years ago.  Subarashi desu!!!”

The excitement the film inspired also saw Queen propelled back on to the music charts, where they hit No. 1 on Billboard’s Artist 100 Chart, reminding fans why they loved them and dazzling the previously-uninitiated. ‘Bohemian Rhapsody’ is officially the world’s most-streamed song from the 20th Century.  In addition, Queen received this year’s Japan Gold Disc Award given by the Recording Industry Association of Japan. Queen won Artist of the Year in the western music category for selling more CDs, videos and Internet downloads than any other artists last year.

Queen also won Album Of The Year and Soundtrack Album Of The Year for “Bohemian Rhapsody (The Original Soundtrack)”. Across the soundtrack album and the Queen catalogue the band’s CD, DVD and digital sales since October last year has exceeded over 1.35 million in Japan.