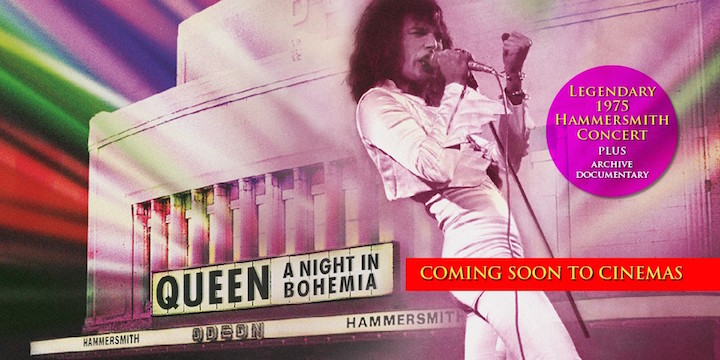 Announcing a special cinema event, Queen: A Night in Bohemia, coming to cinemas worldwide from 28 February 2016 and featuring the legendary Hammersmith Odeon concert from 1975 restored with stunning 5.1 sound, plus a never-before-seen (outside the UK) archive documentary that includes interviews with all four members of the band and offers an illuminating insight into the game-changing year of 1975.

Filmed live on Christmas Eve 1975 at the Hammersmith Odeon in London, and bringing to a climax the most eventful and exciting year so far in the band’s career, this ground-breaking concert was transmitted live on BBC Two’s Old Grey Whistle Test and captured the band firing on all cylinders as they performed breakthrough hits like Killer Queen, Liar, Keep Yourself Alive and Now I'm Here, as well as the first ever live recording of the now monumental classic Bohemian Rhapsody. It sealed Queen’s transition from ambitious upstarts into one of the biggest and most important bands of the era – and beyond.

Brian May of Queen says: “This concert was very special because it was the first time we ever played a whole show completely live on TV… the Christmas Show. The quality, after great rescue work and transfer into the digital domain, is amazing. And the energy we had comes across very forcefully.”

The cinema event features a new documentary never-before-seen outside the UK that digs deep into the archive to tell the story of Queen as it follows their journey from a struggling band gigging at pubs and colleges to the moment they captured hearts and minds with what was to become one of - if not the - greatest song of all time – Bohemian Rhapsody.

Queen’s formative years have never been explored in such detail. With a wealth of unseen interviews, recently unearthed rushes of Queen’s first ever video and outtakes from the recording sessions of Bohemian Rhapsody itself, this is the unique story of early Queen told by the band themselves.

Queen: A Night In Bohemia releases in cinemas worldwide from 29 February 2016

For more information and to book tickets visit www.more2screen.com/QueenBohemia