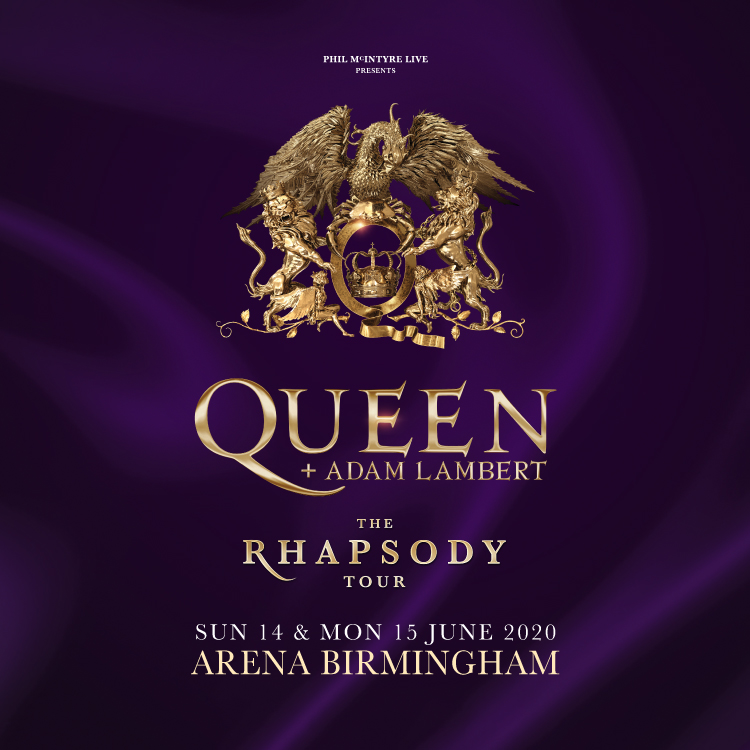 Following a phenomenal demand for tickets, Queen + Adam Lambert have added a third UK city to their hugely anticipated summer run of their Rhapsody Tour shows, announcing two extra dates at Arena Birmingham on 14 & 15 June. Tickets go on sale on 29 January at 10am. The Birmingham dates are the final shows to be added and the last opportunity to see the band perform in the UK in 2020.

In what will be their first European dates since the worldwide box office sensation that was the “Bohemian Rhapsody” film, Queen + Adam Lambert’s announcement today comes having well and truly rocked North America with 25 giant shows last summer which drew universally ecstatic reviews – “it’s loud, it’s fun, and it’s unforgettable” - and played to sold-out audiences totaling close on 400,000 spectators.

The all-new “Rhapsody” show, already hailed as “a marvel of technical advances” is presently on a run of 17 stadium shows across South Asia and Australasia which includes a special appearance at Sydney’s ANZ Stadium Sunday 16 February for the Fire Fight Australia concert for national bushfire relief.

The touring spectacular will then arrive in the UK and Europe in late spring. Full tour schedule below.

Tickets for the added Birmingham dates on the “Rhapsody” tour go on sale to the general public on 29 January at 10am local time.  There are no pre-sales.  Tickets (maximum of six tickets per booking) are priced from £45.00 and available from ticketmaster.co.uk and queenonline.com

At the time of announcing these 2020 European dates, Queen’s Roger Taylor said: "We're back and we're hot.”

An enthused Brian May added: “This is a fearsome new production taking the Queen legacy to a new place.  I’m well proud.”

Adam Lambert commented: “I can’t wait to get back to the UK and Europe, we had a blast on our last tour, and I am so excited to bring this new show over there!”

Since Adam Lambert first shared the stage with Queen for the 2009 American Idol final, his dynamic performances have reinvigorated the band and delighted fans worldwide. Starting as they meant to go on, their first full show together in June 2012 thrilled a crowd of half a million strong in the Ukraine capital city of Kiev. Since then, May and Taylor’s musical fireworks matched by Lambert’s vocal prowess and stage presence have made for an explosive combination. Over 200 gigs later, the partnership has remained a commercial and critical triumph, playing to enraptured full houses in every corner of the world.