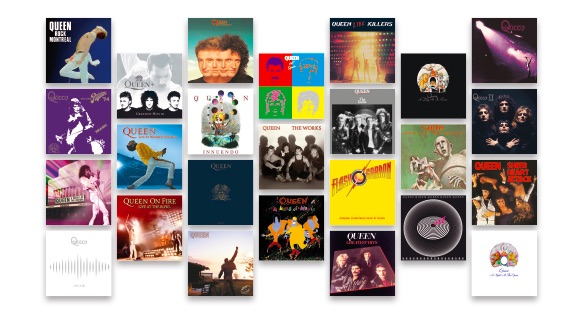 Issue by issue, Queen The Vinyl Collection, made up of single, double and triple albums, builds into a career-spanning library of Queen’s historic album discography. With artwork overseen and designed by Queen’s art director Richard Gray, each album is presented in high-quality sleeves reprising and, in some cases, refreshing the original artwork. The specially pressed LPs appear on 180g black vinyl, with all titles mastered and cut at world-renowned Abbey Road Studios in London to achieve the best possible sound quality.

Queen The Vinyl Collection spans the band’s career from its first album, ‘Queen’, in 1973, through to ‘Made In Heaven’, released in 1995, which comprises Freddie’s final studio recordings and additional material from the band’s earlier studio sessions. In addition to Queen’s 15 studio albums, Queen The Vinyl Collection features all three classic Greatest Hits titles (including the currently unavailable ‘Greatest Hits III’), and ‘On Air’, a collection of the band’s BBC Radio recordings. The collection is completed with six live concert albums, among them the long out-of-print Live Killers and Live At Wembley Stadium, on triple LP.

Each album is accompanied by an illustrated 8-page magazine containing the stories behind the group’s renowned recordings. With notes by Queen archivist and writer Greg Brooks (in consultation with Queen publicist Phil Symes and long-time expert fan Jim Jenkins) translated into Spanish, each issue reveals fascinating details about the creation of the album, including the poignant recording sessions for the last two albums with Freddie, and the key tracks therein, and features quotes and insights from all four members of the band, as well as rare photos, record sleeves and poster art.

Queen The Vinyl Collection is a 25-part series available in Chile. Single album copies will retail at $19,990 (Chilean Pesos); double albums at $24,990; and triple albums at $29,990. More information for local consumers is available online here.