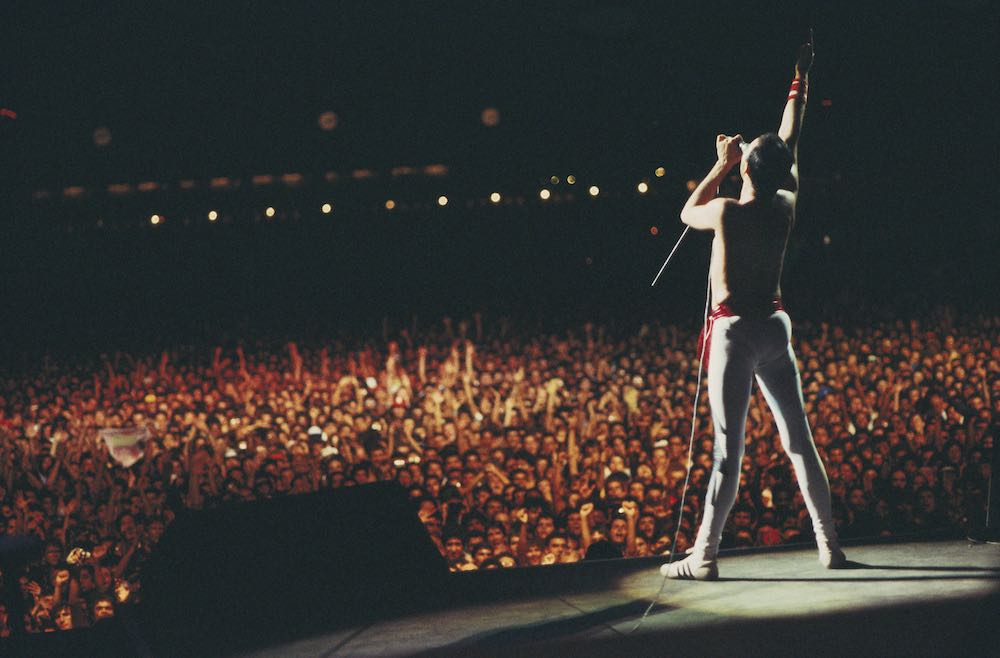 Queen The Greatest: a celebration of 50 of the greatest moments from the Queen story so far.

“A lot of the groups were scared to come here in the early days, and we took the plunge. And look what happened!” Freddie Mercury, Rio de Janeiro, Brazil, 1985

No celebration of Queen's greatest moments would be complete without a look back at their record-breaking performance at Brazil’s inaugural Rock In Rio festival. Featuring some rare interviews from the after-show party.

Revisiting one of Queen’s most iconic moments and greatest achievements, Queen’s record-breaking headlining appearance at Rock in Rio is the focus of this week’s Queen The Greatest.

In January 1985, Queen flew out to Rio de Janeiro in Brazil to headline what was to be the biggest rock festival ever held. Queen would be the headline act for the 10-day festival performing on the opening night January 12, and the closing show on January 19th.

Over the two nights, the band performed to over 600,000 eager and rock-hungry Brazilian fans. Edited highlights shown on Brazil’s national O Globo television channel throughout South America were watched by nearly 200 million people.

It was the beginning of a decades-long love affair between the band and South America.

Queen’s previous 1981 ‘Gluttons For Punishment’ tour stadium experiences in South America stood them in good stead for what was to come, but could hardly have prepared them for overwhelming reception they would receive on their return to Brazil.

Interviewer: “Freddie, can I just stop you for a minute and ask you how everything’s going?”

Freddie: “I think everything is going to be OK. I’ve got first night jitters, I think, this is the first big night. We’re going to watch the other bands and see how it’s all going. I just want to get a feel of it all.”

In a site specially built to hold a staggering 250,000 people, Queen took to the stage at 2 o’clock in the morning. Yet despite the late hour, they were met by an extremely excitable crowd, stretching as far as the eye could see.

Their first night delivered another spectacular show, and as a rare BBC TV report from the after-show party at Rio’s famous Copacabana Palace Hotel highlights, the band clearly didn’t want this special night to end.

Interviewer: “What’s it like looking out over all that huge amount of people?”

Freddie Mercury: “Well, it’s mind-boggling you know, and to me I just…it’s like a housewife, to be honest, just go on there and do my job and then come home.”

Interviewer: “Surely, it can’t be like being a housewife?”

Freddie Mercury: “Oh, you know what I mean. It’s just a job to me anyway, but it’s mind-boggling, what can I tell you, it’s quite amazing. I mean, you saw those people there.”

Interviewer: “So guys, how did you feel it all went tonight?”

Freddie Mercury: “When you’ve got a crowd as large as that, and the event, the adrenaline just takes you over, and so I guess I was sort of cavorting about more than usual, I don’t know.”

Roger Taylor: “The only thing was it was very late by the time we went on, but everybody stayed so, I mean, it was great really.”

Interviewer: “For a lot of the bands this was a first visit to South America, it was Queen that blazed the trail on two previous tours, being the first big rock band to come here.”

Freddie Mercury: “The Government actually wanted us to be here, and I think. A lot of the groups were scared to come here in the early days, as it were, and we took the plunge. And look what happened!”

Interviewer: “Queen gained a lot of fans in Brazil, some of whom managed to persuade Brian May to come and play on the beach.”

Queen fans had placed five hundred lighted candles in the sand spelling out the band’s name. Observing it, Brian and his daughter left the party for a while to join the fans on the beach, a gesture fans still remember to this day.

Queen would return to Rock in Rio in 2015 with Adam Lambert, for the Festival’s 30th anniversary – once again receiving a rapturous reaction.

Looking back to Rock in Rio 1985, it had been an extraordinary way to start the year, and as the band left Brazil, they must have wondered if there would ever be an event as remarkable as that one had been.

Little did they know the answer to that question was just a few months away…as we will discover in the next episode of Queen The Greatest.