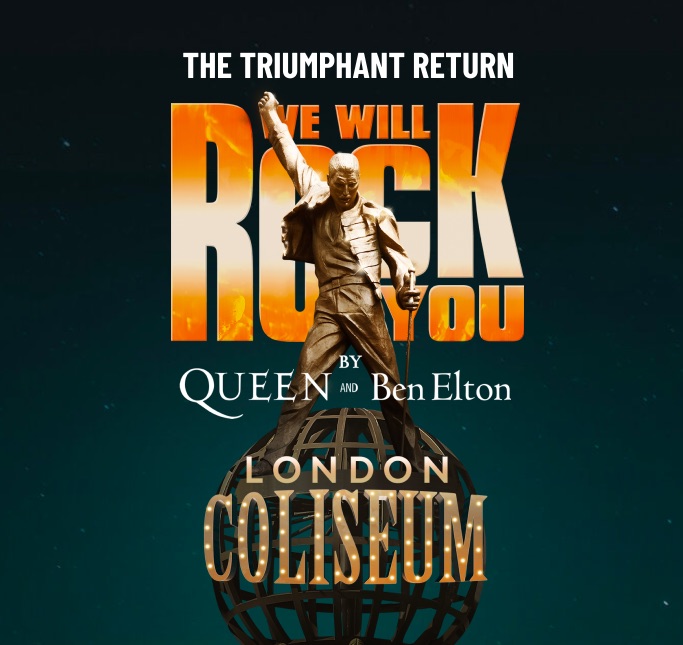 We Will Rock You Returns To London's West End

21 YEARS SINCE IT ALL BEGAN, THE WORLD’S FAVOURITE ROCK THEATRICAL RETURNS HOME TO LONDON’S WEST END

TICKETS ON SALE FROM 10AM ON 6 DECEMBER AT WEWILLROCKYOULONDON.CO.UK

21 years after it first exploded into the West End, Queen and Ben Elton’s sensational smash hit show ‘We Will Rock You’ returns to London next year for an historic, strictly limited 12-week residency at the London Coliseum – the same iconic stage which saw Freddie Mercury’s Royal Ballet gala performance in 1979.

Featuring 24 of Queen’s greatest hits and a hilarious script by Ben Elton - who returns to the director’s chair for this London homecoming - ‘We Will Rock You’ rivals the scale and spectacle of the band’s legendary live performances. Queen superstars Brian May and Roger Taylor are delighted that the show will soon be wowing London fans once again.

Brian May said: “I’m thrilled we finally have this opportunity to put We Will Rock You back on stage in London, where it was born. The show’s original message of the fight to re-establish individuality in a dystopian corporate world is even more relevant now than when we began. It will be a completely new production that will burst on to the prestigious London Coliseum stage – but the story, the humour, and of course the Queen music, will hit you harder than ever. We WILL Rock You – again!!”

Ben Elton said: “I hope somebody's squared this with English Heritage because the fabulous London Coliseum is a Grade II listed theatre and We Will Rock You is gonna blow the roof off.”

First premiering at London’s Dominion Theatre in 2002, ‘We Will Rock You’ was seen by six million people over 4600 performances during an astonishing 12-year run, becoming one of the most successful musicals in West End history and the longest runner at the Dominion by a margin of nine years. It also found unprecedented popularity around the world, playing to a global audience of 20 million across 28 countries.

‘We Will Rock You’ tells the story of a globalized future without musical instruments. A handful of rock rebels, the Bohemians, fight against the all-powerful Globalsoft company and its boss, the Killer Queen; they fight for freedom, individuality and the rebirth of the age of rock. Scaramouche and Galileo, two young outsiders, cannot come to terms with the bleak conformist reality. They join the Bohemians and embark on the search to find the unlimited power of freedom, love and rock!

“One of the best shows I’ve seen in yonks. An evening of sheer entertainment and enjoyment” Daily Mirror