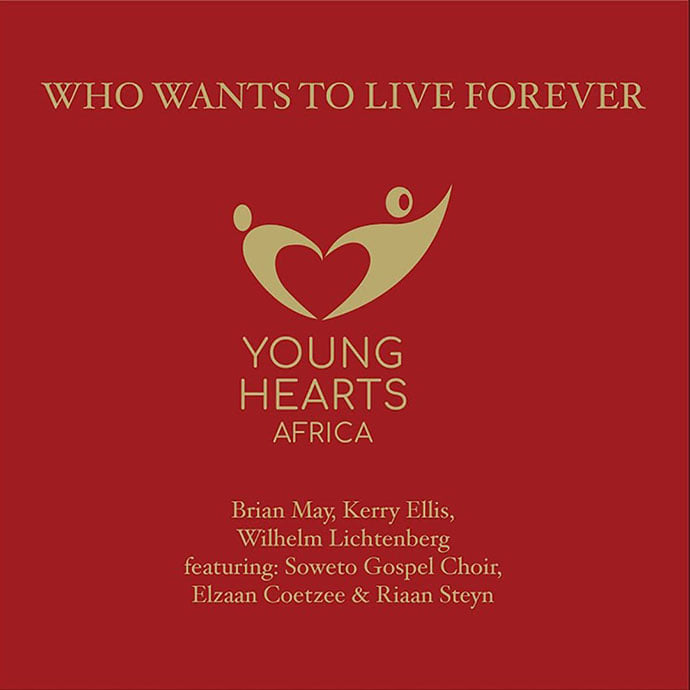 What do a Rock superstar, a West End star and a surgeon with a love of music have in common?

The answer is a combined determination to keep the hearts of children in Africa beating.

Queen’s mega-hit song “Who Wants To Live Forever” was written by May for the motion picture Highlander in 1986. It has become one of the most recognizable melodies of all time. For this first project in the Young Hearts Africa initiative, the song has received a unique and spectacular classic rock crossover style makeover in a brand new arrangement by Riaan Steyn.

Steyn is the musical genius behind Young Hearts Africa and boasts a long list of accomplishments as composer, arranger and music producer. Working out of Traxtudio International in Cape Town, he employed his unique wizardry to produce a work redolent of the pathos and emotion of the original, infused with rich African sounds.

The new arrangement is scored for two solo voices, a rock band, a full symphony orchestra and choir.
Combined with Ellis' clear sound, schooled on Broadway and in London's West End, Lichtenberg's pure, powerful soaring tenor voice and the unmistakable energy of the Soweto Choir, May's unmistakable guitar playing takes the concept of symphonic rock to a new level and May himself described the processing as “pure genius”.

Cardiovascular disease is the third most common single cause of death in South Africa and the rest of the African continent. Dr. Lichtenberg says that heart disease in children places a devastating burden on families and communities and the prevalence in sub-Saharan Africa is almost ten times higher than in developed countries.

“With the prevailing global crisis, this situation is set to escalate further and, as resources are diverted, the loss of lives amongst the most vulnerable members of the population of these areas, i.e., helpless young children, will devastate entire communities.”

Funds raised through this initiative will be donated to The Children’s Cardiac Foundation for Africa, in addition to benefitting the 1000 Hearts initiative by the Christiaan Barnard Division of Cardiothoracic Surgery at the world-famous Groote Schuur Hospital and the Red Cross Children’s Hospital in Cape Town.

“No one can live forever," says the Singing Surgeon, “but by raising the funds needed to keep the hearts of Africa’s children beating, we can build on a legacy that will be there to serve our children long after we are gone.”